“More than one million Australians are now unemployed with the official jobless measure breaking through the seven-figure mark for the first time on record despite an extra 115,000 jobs added in July.” (The Age, 2020)

The Covid-19 pandemic has made all of our lives unpredictable. Government policy designed to combat the spread of the virus has had a considerable impact on employment and industry. The recent introduction of level four restrictions in Victoria has forced many industries to temporarily stop operating or to significantly adjust the way their business functions. The restrictions will likely lead to higher unemployment levels and, as a result, will impact our national economy.

“Melbourne has been plunged into stage 4 restrictions, which severely limit people’s movements and how businesses are allowed to operate. Mr Morrison said preliminary estimates from Treasury suggested those measures would shrink real Gross Domestic Product (GDP) by between $7 billion and $9 billion in the quarter ending in September” (ABC News, 2020)

The rapidly changing situation has highlighted the need for data driven decision-making at all government levels. Access to current data allows for a better understanding of the impacts of these societal changes. It facilitates informed, evidence-based policymaking to respond to the complex consequences of the pandemic.

With the release and availability of the Australian Bureau of Statistics’ Weekly Payroll Jobs and Wages data on AURIN, researchers can now access the most recent data available, investigate the impact of COVID-19 on employment vulnerability and compare changes between points in time. To perform in depth analysis, researchers can integrate the payroll jobs and wages data with other valuable population, health and economic data available through the AURIN Portal and Data Catalogue.

The following series of case studies explores the impact of the pandemic on Australian businesses. The case studies aim to uncover and identify vulnerable industries and the population groups that are most likely to suffer from COVID-19 related policies. We encourage researchers to further analyse the data presented here and to suggest any other relevant data which could be used to better understand unemployment vulnerability.

While the previous case study focused on understanding changes in Labour Force Participation and Unemployment Rates, this case study takes a look at the Weekly Payroll Jobs and Wages Index to obtain  insights into employment changes. The index was created by the Australian Bureau of Statistics to allow the comparison between periods of time and the most recent release captures weekly data in the period between January 1st and July 25th. The point of reference for COVID-19 is the week ending 14 March (Index =100) when the 100th positive case was recorded in Australia, and changes in the index between points in time represent a decline or increase in numbers of jobs or wages.

Considering that most businesses report payroll jobs through Single Touch Pay to the Australian Taxation Office (ABS, 2020), changes in work patterns indicate a decline or increase of the number of employees within a business, whereas changes in total wages indicate variations of the total value of wages paid to employees within a week. 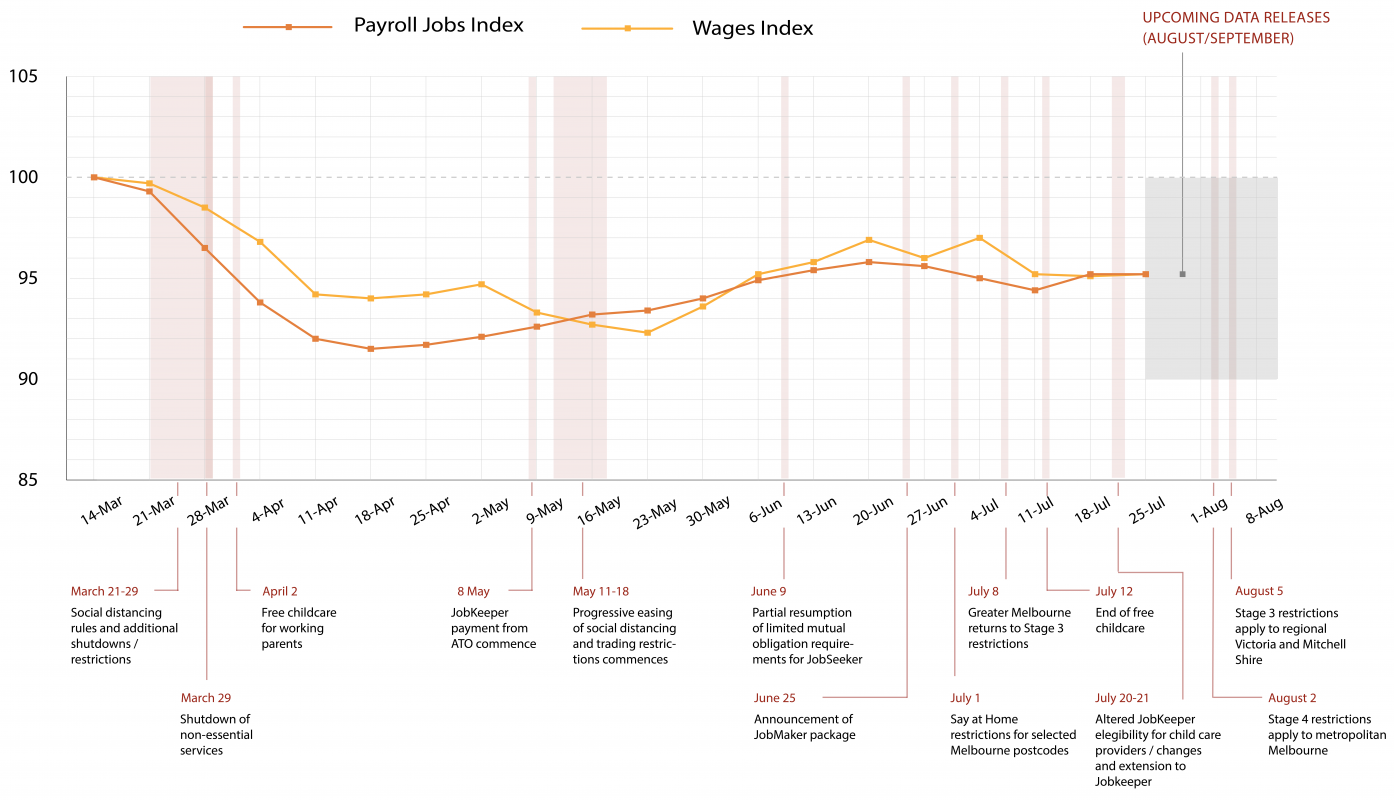 Initial observations of the payroll data (Figure 1), show an initial decline in employment at the end of March, following nation-wide social distancing measures and shutdown of non-essential services. The payroll jobs index reached a low of 91.5 on the week ending 18 April and the wages index 92.3 on 23 May. As affected states and territories regained control and started easing restrictions, a moderate recovery can be observed in June and early July, as payrolls and wages grew to an index of 95.8 and 97 respectively. However, the rapidly increasing numbers of Victorian cases of COVID-19 in early July led to the announcement of Melbourne to re-enter stage 3 restrictions on the 8th of July (DHHS, 2020). From this point we can see a negative response in terms of employment by looking at effect payroll and wages indices. We might then expect a further decline of payroll jobs and wages to occur in August, which will be observed in the upcoming ABS data releases in August in September, which will be available for researchers through the AURIN Portal and Data Catalogue.

Additionally, the disparity between employment changes in major cities and regional areas can be observed in Figure 2 below, indicating that major urban areas have generally been more affected than rural areas by stringent measures leading to business closures and job losses. When comparing the latest ABS payroll index figures (week ending 11 July) to the pre-COVID point of reference (week ending 14 March), we found indices between 90 and 95 points, which represent a decrease of 5 to 9% for most major urban and inner-city areas jobs: Cairns – 93.7, Brisbane Inner City – 93.6, Sydney City and Inner South – 91.1, Inner Melbourne – 90.8, Adelaide – West – 93.

However, several regional areas in Victoria, South Australia and Tasmania have suffered their highest impact so far, indicated by a decline in payroll jobs of between 6 and 10%: North West Victoria, Latrobe and Gippsland areas recorded indices of 89.8,  South Australia – South East area 93.1, Barossa – Yorke – Mid North 93.6, as well as Launceston and North East Tasmania an index of 92.7 respectively. This could be explained by looking at the most affected industries in these states (Figure 4 below), which are Agriculture, forestry and fishing, Accommodation and food services, as well as Arts and Recreation. Considering that some of these areas have been severely affected by the recent bushfire season (BBC, 2020), we could assume that tourism, arts and recreation, as well as agriculture and forestry businesses have suffered a sustained impact that added to the strain caused by recent (and in the case of Victoria renewed) travel, social distancing and stay at home restrictions. 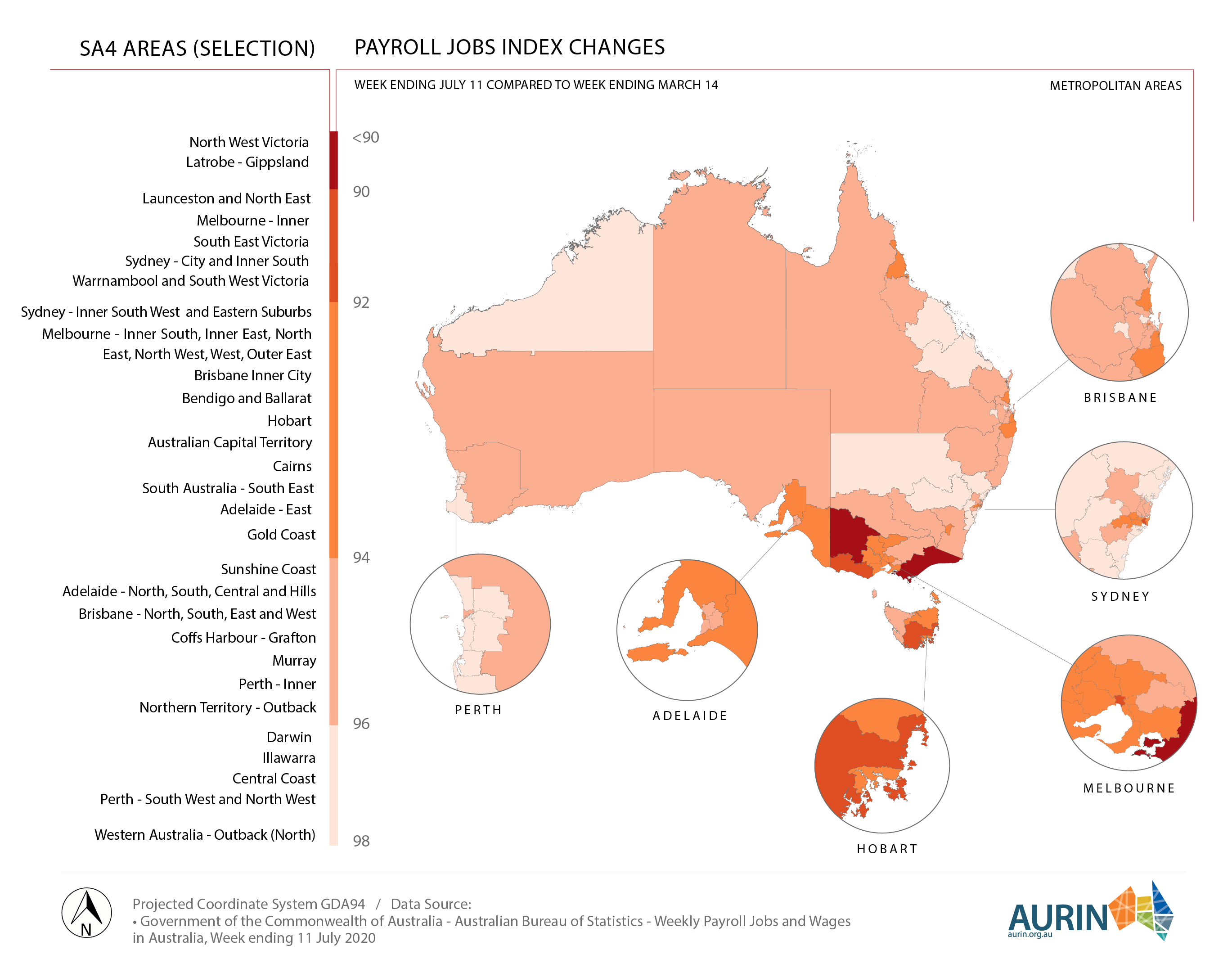 HOW IS THE ECONOMY AFFECTED?

According the Australian Bureau of Statistics’ National Accounts data, Victoria is the second largest contributor to the national economy and recorded a Gross State Product of $446 billion in the financial year 2018-19, which is the equivalent of 23.7% (Figure 3). Renewed lockdown restrictions in Metropolitan Melbourne and Victoria are expected to cause a substantial deficit to the national GDP, as announced by the Prime Minister:

“Of the economic cost, 80 per cent, or $6 billion to $7 billion, is expected to come directly from affected industries and businesses in Victoria, while the rest will be due to broader supply-chain effects and impacts on national confidence.” (ABC News, 2020)

Therefore, any policy decisions taken in Victoria will have considerable impact on our national economy and are reflected directly in the Gross Domestic Product. The Australian Bureau of Statistics’ March Key Figures announced that “Gross Domestic Product (GDP) fell 0.3%. The through the year growth was 1.4%, the lowest result since the Global Financial Crisis in September 2009, well below the long-term average of 3.4%.” (ABS, 2020). 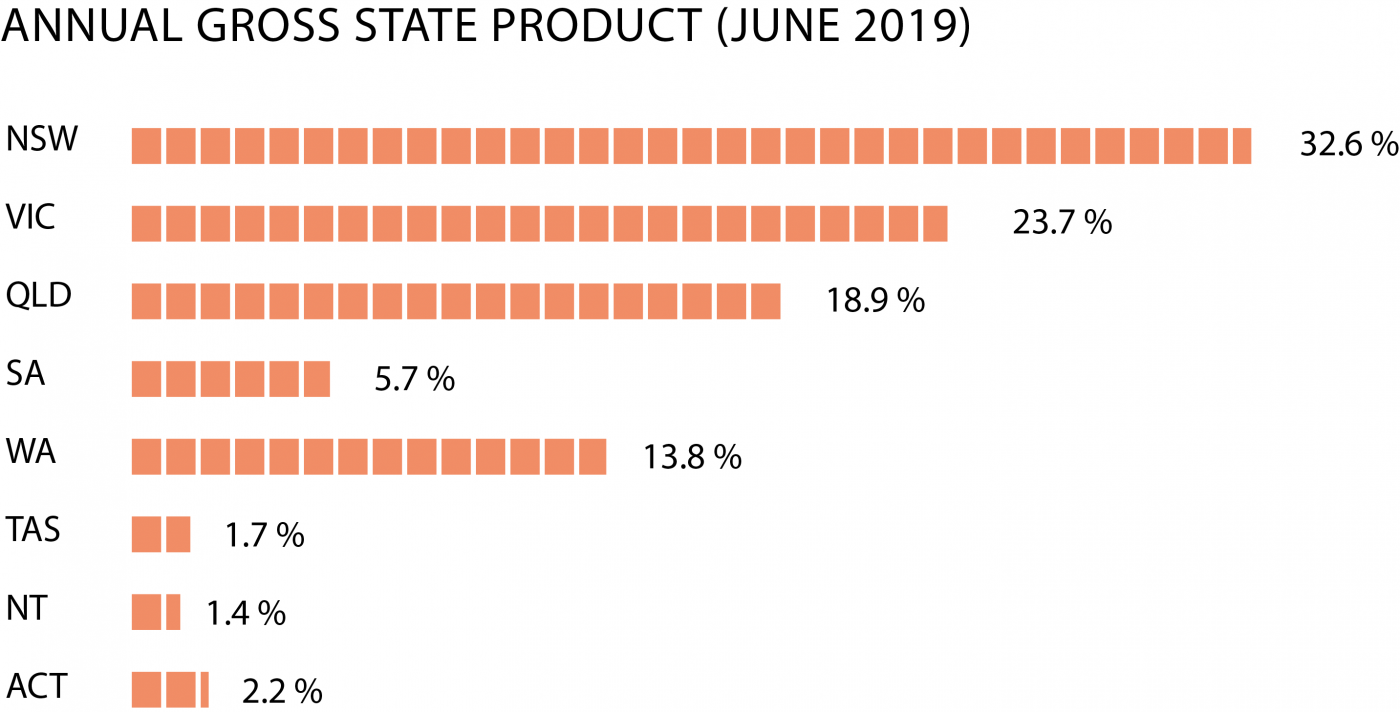 WHAT ARE THE DIFFERENT INDUSTRIES AND HOW WERE THEY AFFECTED?

Mitigating the spread of the virus involved drastic adaptation to our daily lives, and social distancing measures included a radical change in work arrangements. While many office workers were able to accommodate and work remotely from home, others such as those in people facing industries such as hospitality and retail, as well as venues supporting large numbers of people, faced temporary shutdowns or restrictions in the way they operate.

“Unsurprisingly, we find the hospitality industry will be hardest hit. More than half of workers in the “accommodation and food services” industry are likely to be out of work as a result of this crisis.

The “arts and recreation services” industry is not far behind.

A range of professional industries – where people are more likely to be able to work from home – are much less likely to shed jobs in the weeks and months ahead.” (Grattan Institute, 2020)

Comparing payroll jobs indices across industries between the latest available releases from the Australian Bureau of Statistics Weekly Payroll Jobs data demonstrates how quickly the employment situation can change, revealing both vulnerable and resilient industries (Figure 4). This snapshot captures some of the most significant changes since the start of the pandemic, and researchers can access this data to further investigate the variability between industries, as well as the impact of local policies on Australian businesses.

Overall, a general decline can be observed in most industries across all states and territories for the week ending June 27 figure (Figure 4 – left), with the Arts and Recreations sector, as well as the Accommodation and Food Services being particularly affected by stringent lockdown measures and recording a decline of up to 30% and 33.7% respectively, compared to the point of reference (week ending 14 March).

With restrictions progressively being lifted throughout June (but varying between individual states and territories), July 11 (Figure 4 – middle) figures present how possible journeys to recovery as well as the negative impacts can vary greatly between states and industries. Compared to the previous fortnight, Victoria’s Education and Training, and Accommodation and Food services continue to be the most affected in Australia. Education recorded a decline of 3.8% compared to June 27, while the Accommodation and Food services recorded an 8.3% increase and remains the most affected sector in Australia. In Tasmania, the Mining sector is showing signs of rapid recovery with 16.4% growth, while the Financial and Insurance services continue to struggle by dropping further 3.3%. The Agriculture, Forestry and Fishing sector is also showing disparity between the observed recovery in Norther Territory with positive 3.6%, while decreasing further 4.5% and 2.9% in Tasmania and Victoria respectively.

The latest July 25 (Figure 4 – right) data shows disparities between states and industries. Border closures are likely to be the reason for the decreasing number of jobs in Education in Training in Victoria and New South Wales, as students outside these states and the country are unable to commence or return to study. The education and training figures for these states dropped by 9.3% and 4.9% respectively compared to 14 March figures (and decreased by 1% for Victoria and 1.7% for New South Wales since 11 July). The Accommodation and Food services, as well as the Arts and Recreation sector remain the most impacted across the country, while recording persistently low figures in Victoria and continuing to decrease by 4% and 2.5% respectively since the last fortnight. The Victorian Electricity, Gas, Water and Waster services sector is the highest in the country and grew 3.8% since the week ending 14 March. This increase may be explained by cooler winter temperatures during winter months, as well as increasing demand in services due to stay at home restrictions.

Surprisingly despite changes to face-to-face sales, Retail trade proved to be one of the most stable and adaptable industries since the start of the pandemic. Even though the effects of retail closures were felt nationwide, and many retail stores were forced to temporarily close or adapt trading operations to comply with regulations, the decline in payroll jobs appears stable between 27 June and 25 July. Again, this latest data shows that Victoria is the most affected state, having lost 4.3% of retail jobs since the start of the pandemic, and Western Australia the least impacted with only 0.2% decrease. However, further analysis is needed to provide insight into the vulnerability of the population employed by the Retail sector. 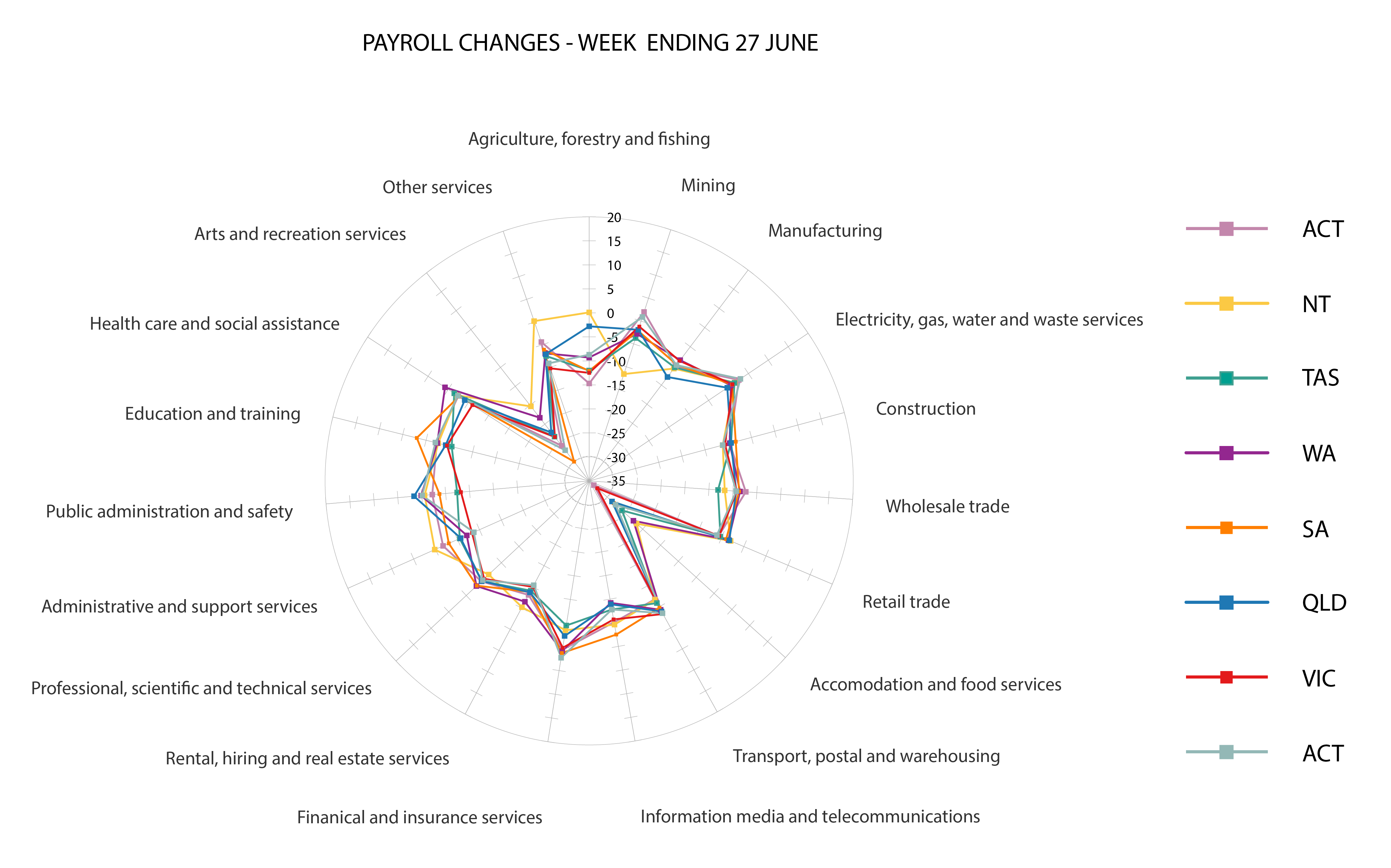 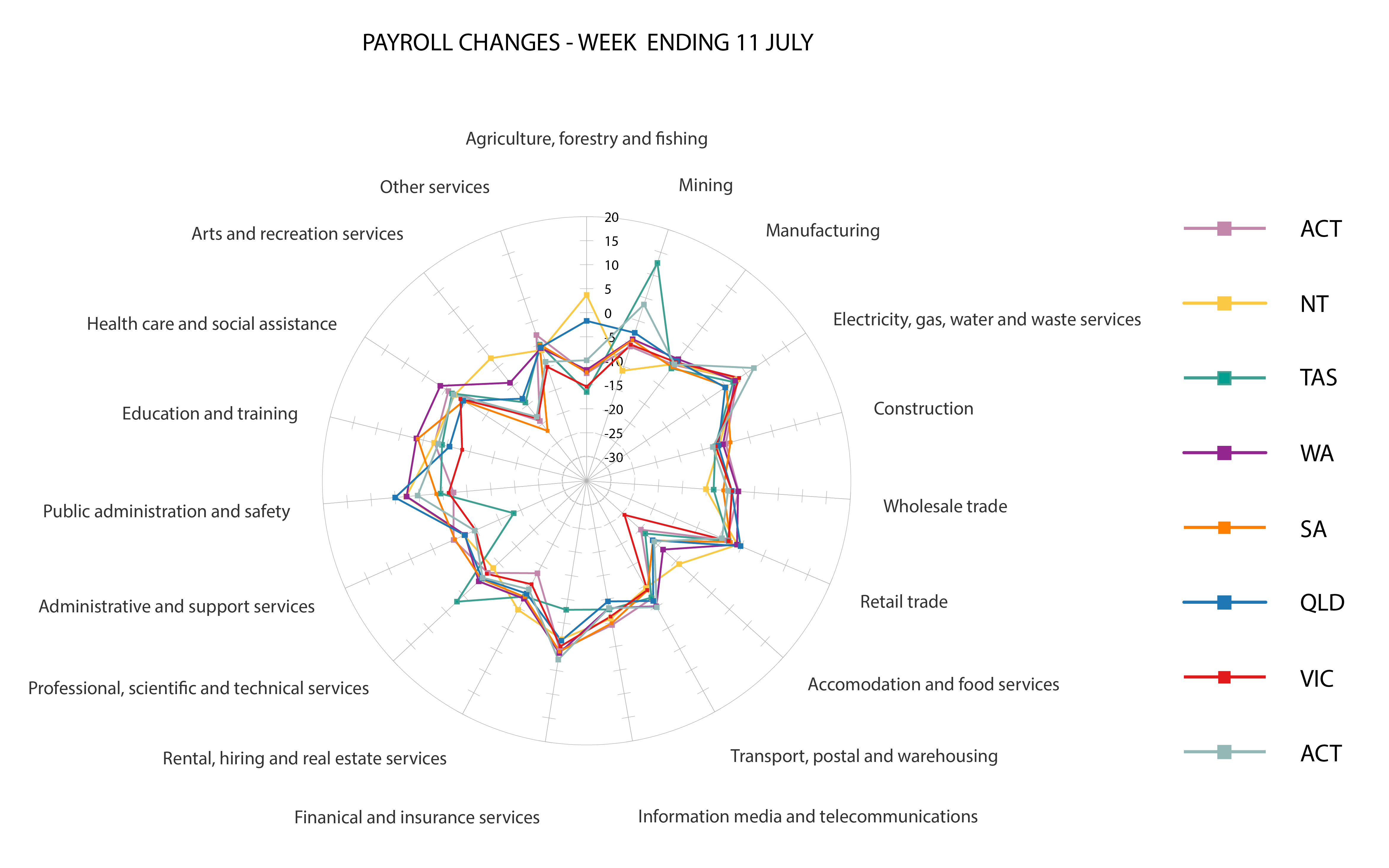 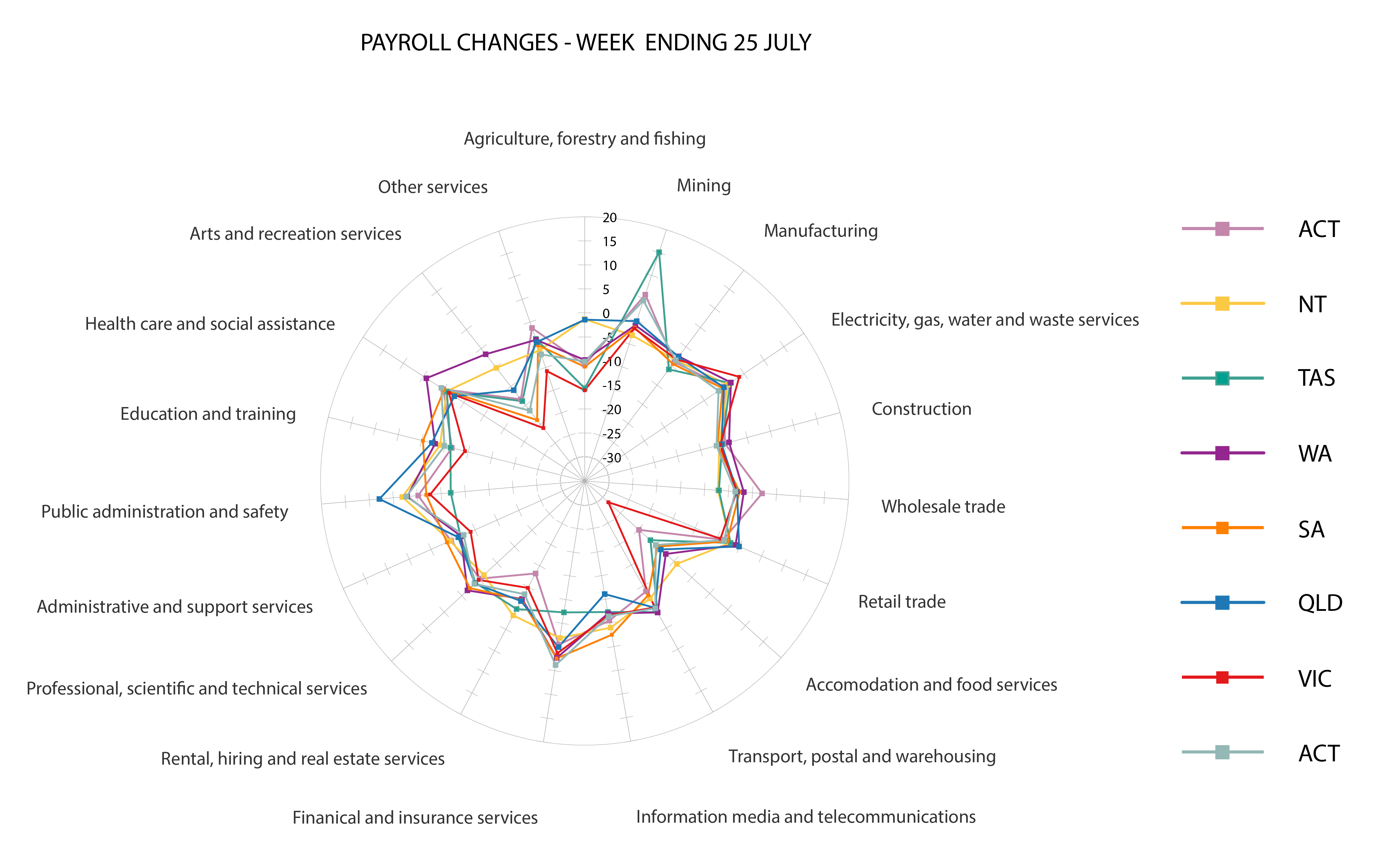 Please stay tuned for the upcoming release, as we will be showcasing further characteristics of individual employment sectors and uncover population sectors that are most affected by job insecurity or job loss.

The COVID-19 pandemic continues to create employment vulnerability in many industries which creates a wide variety of research possibilities. We invite researchers to access AURIN and further explore this dataset, investigate how policies drive or decrease the demand for certain jobs and services, as well as contribute to a better understanding of the impacts of COVID-19 on Australian businesses and employment.