The operations of many businesses have been restricted as a result of pandemic related government policies, as Australia officially entered an economic recession for the first time in nearly 30 years on the 1st of September 2020.

Recent ABS data has revealed the Accommodation and Food Services sector recorded the largest contraction in payroll jobs. In the first week of August, 21% fewer jobs were recorded nationally in the Accommodation subindustry compared to the beginning of the pandemic, and 15% in the Food and Beverages subindustry respectively (ABS, 2020). Overall, the sector remains the slowest to recover from the economic shock, affecting the state of Victoria considerably: up to a third of jobs in the Accommodation and Food Services sector were lost by the end of July, as the state reimposed restrictions.

“Accommodation and food was by far the hardest hit sector, with output down a whopping 39 per cent in the three months to June 30.” (ABC News, 2020)

The following analysis demonstrates an approach to uncover various factors relating to employment vulnerability using AURIN data. The data has been used to identify areas susceptible to economic turmoil as a response to restrictive policies, as well as population groups at risk of financial hardship as a result of job losses in the Accommodation and Food Services sector. Researchers and policymakers can use AURIN data to further explore these areas and take appropriate and timely actions to respond to the effects of COVID-19, as well as bushfires and recession in the most affected areas.

For a detailed timeline of events, please refer to the previously released Payroll Jobs and Wages Index chart.

With events rapidly unfolding, data availability is limited and it may take several months until the social and economic dimensions of COVID-19 effects can be fully grasped and understood in more detail. For this case study, we used information from readily available spatial data—as well as non-spatial data such as surveys and news articles—to reveal a broader context and background to this dynamic situation.

The Australian Bureau of Statistics – Data by Region – Economy and Industry release uses data to reveal the proportion of population employed in the Accommodation and Food Services industry, as well as population numbers at SA2 level. Looking into the economic dimension of ongoing restrictions, the SA4 Payroll Jobs is the most recent data available that is relevant to understanding weekly changes to employment and allows direct comparison between different points in time.

Both datasets are available through the AURIN Portal and Data Catalogue. Complementing these data, we also refer to non-spatial insights from the ABS Weekly Payroll Jobs and Wages as well as the latest Tourism Research Australia National Visitor Survey to capture the “extent of the downturn, tracking the industry’s eventual recovery and support for Australian businesses.” (TRA, 2020).

We invite researchers and policymakers to access these spatial datasets available through AURIN to conduct in-depth analyses, as well as request further datasets from us that may not yet be available.

UNDERSTANDING THE ACCOMMODATION AND FOOD SECTOR

The Accommodation and Food Services sector employed over 1 million people in Australia in the 2018-19 financial year. The sector relied on overnight travel and hospitality to generate income and create jobs.

Research from Travel Research Australia reveals that recent bushfires and COVID travel restrictions have caused a considerable decrease in overnight trips and spending. When compared to March quarter 2019 overnights trips are down by 39% and spending is down by 41%.

“Hotels were among the first to respond to travel restrictions. As bookings diminished, hotels went into hibernation, standing down staff while retaining key personnel to maintain security and plant operations.” (TRA, 2020) 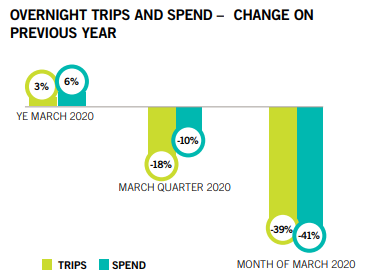 ABS data also reveals that both the Accommodation and Food and Beverage services subindustries recorded a significant contraction (Figure 2). There was a 35% decline in jobs nationally, only a month after the introduction of social distancing measures and the closure of non-essential businesses. A moderate recovery can be observed at the end of April, which continued to grow as jobs were added through government support and progressive easing of restrictions in early May. This allowed hospitality businesses to reopen in most parts of the country, as well as hotels willing to participate in quarantine programs for returned overseas travelers and offset income losses.

For a detailed timeline of events, as well as an explanation of the Payroll Index concept, please refer to the previous article on Employment Vulnerability. 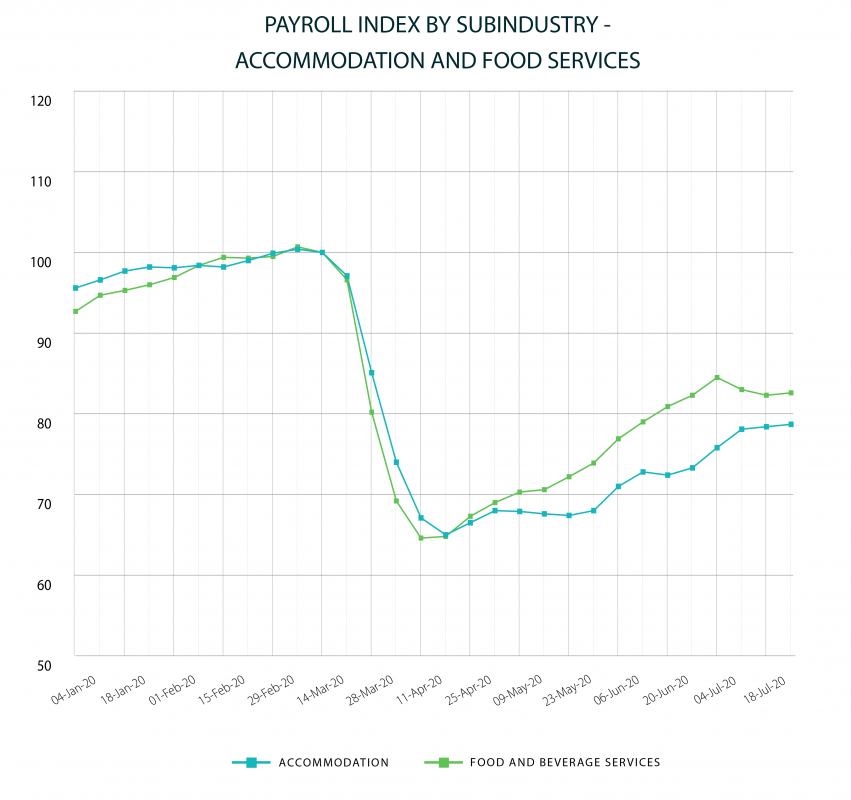 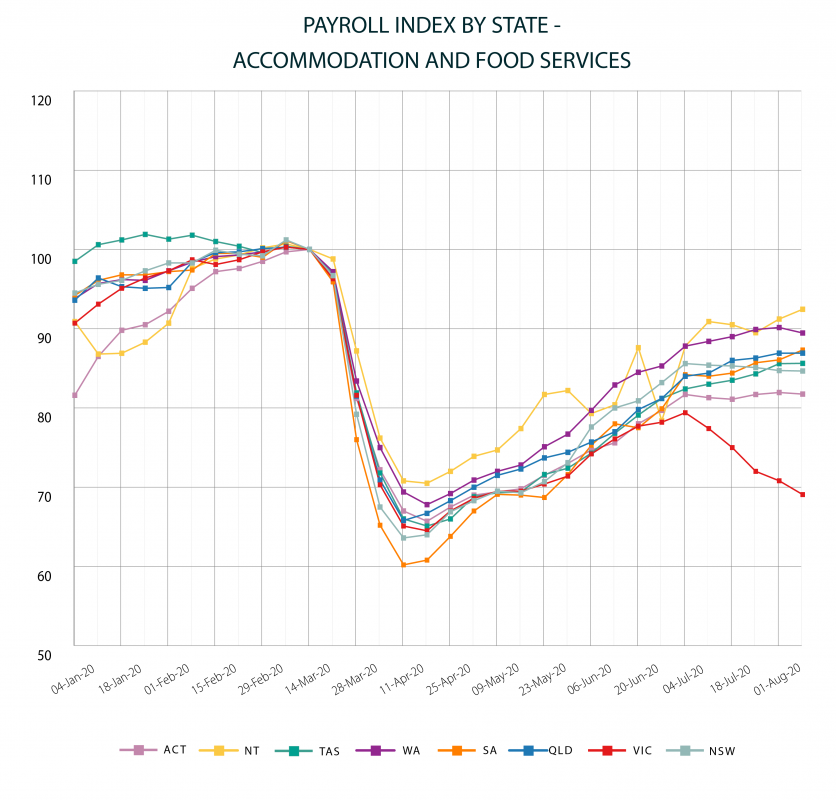 The Accommodation subindustry reached a peak index of 78.7 in the week ending July 25. This represents a nearly 14% increase compared to the week ending 18 April, but the proportion of jobs in this subdivision remains 21% below the 14 March benchmark at the start of the pandemic.

The Food and Beverage subindustry recovered to a payroll jobs index of 84.5 in the week ending 4 July 2020, which represents a 20% increase compared to the week ending 11 April. This may be explained by hospitality businesses reopening in parts of the country, as well as adopting more flexible operating models to deliver contactless services for customers. Nevertheless, the week ending August 8 recorded 15% less jobs than at the beginning of the pandemic.

Within the states and territories (Figure 3), the week ending 11 April 2020 recorded the lowest payroll indices across all states, between 60.2 in South Australia and 69.4 in Western Australia. The sharp decline in indices represents job losses between 30-40% in the aftermath of nation-wide restrictive measures.

Following the 35% decrease in jobs in April in Victoria, an increase of 14% was observed by the week ending 4 July. This corresponds to easing restrictions, as restaurants and cafes reopened and allowed for limited numbers of seated patrons. However, as showcased in the previous article, the rising number of COVID-19 cases forced the Victorian government to reintroduce restrictive measures to flatten the curve, which caused a renewed decline in jobs in the Accommodation and Food Services subindustries. Referring to the latest data on Payroll Jobs, an index of 69.1 was recorded on 8 August in Victoria, which represents the lowest index recorded among all states and territories. This means that nearly one in three Victorians working in this sector has lost their job since the start of the pandemic.

MAPPING EMPLOYMENT IN THE ACCOMMODATION AND FOOD SERVICES SECTOR 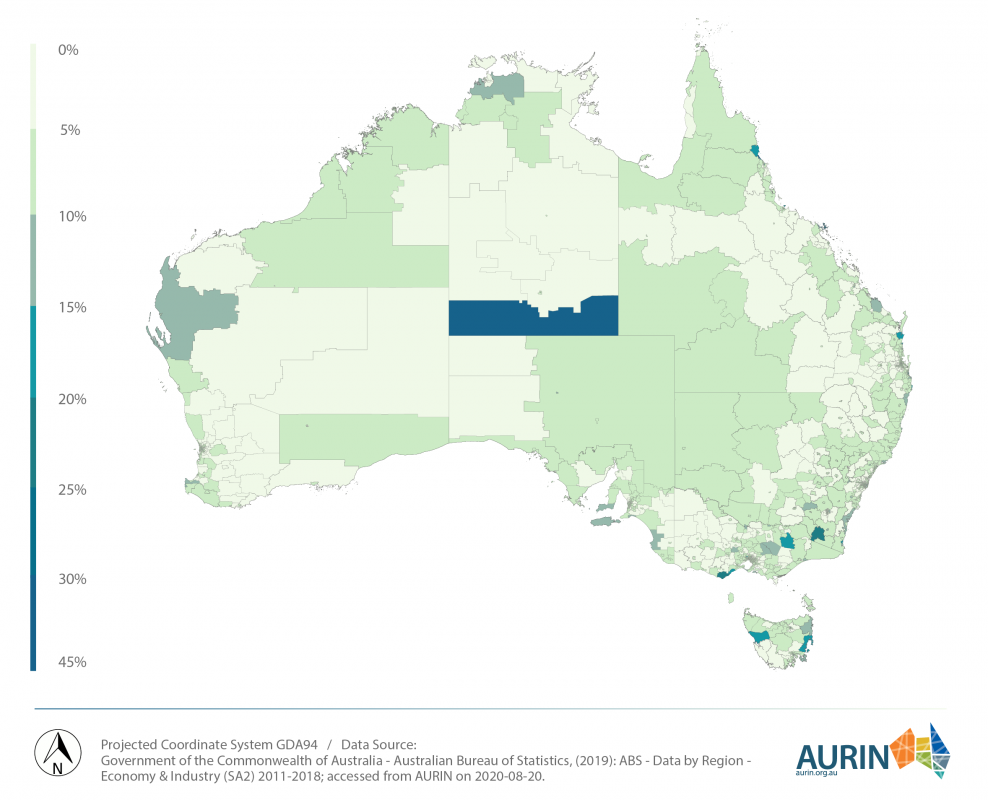 After understanding the magnitude of the impact of COVID-19 policies from an employment perspective, Economy and Industry data from the ABS is used to map the proportion of employment across urban and regional areas in Australia. In addition to identifying SA2s with a higher proportion of the population employed in this sector, the total number of employed people offers an insight into population distribution. While the effects of the government policies may be exacerbated in highly populated areas, it is important that policymakers also consider low population areas that have a high percentage of people working in this sector and are susceptible to becoming economically vulnerable until steady growth can be observed again.

As an example, in Figure 5 we compare the following SA2s that coincide with renowned travel destinations: Surfers Paradise in Queensland and Peterman-Simpson in the Northern Territory, which includes the Uluru-Kata Tjuta National Park.

A closer look into individual states and territories reveals that city centers, as well as travel destinations, present the highest percentage of people working in this sector. These areas coincide with destinations for domestic and international visitors on holiday, business and education travel purposes (Figures 6-13). 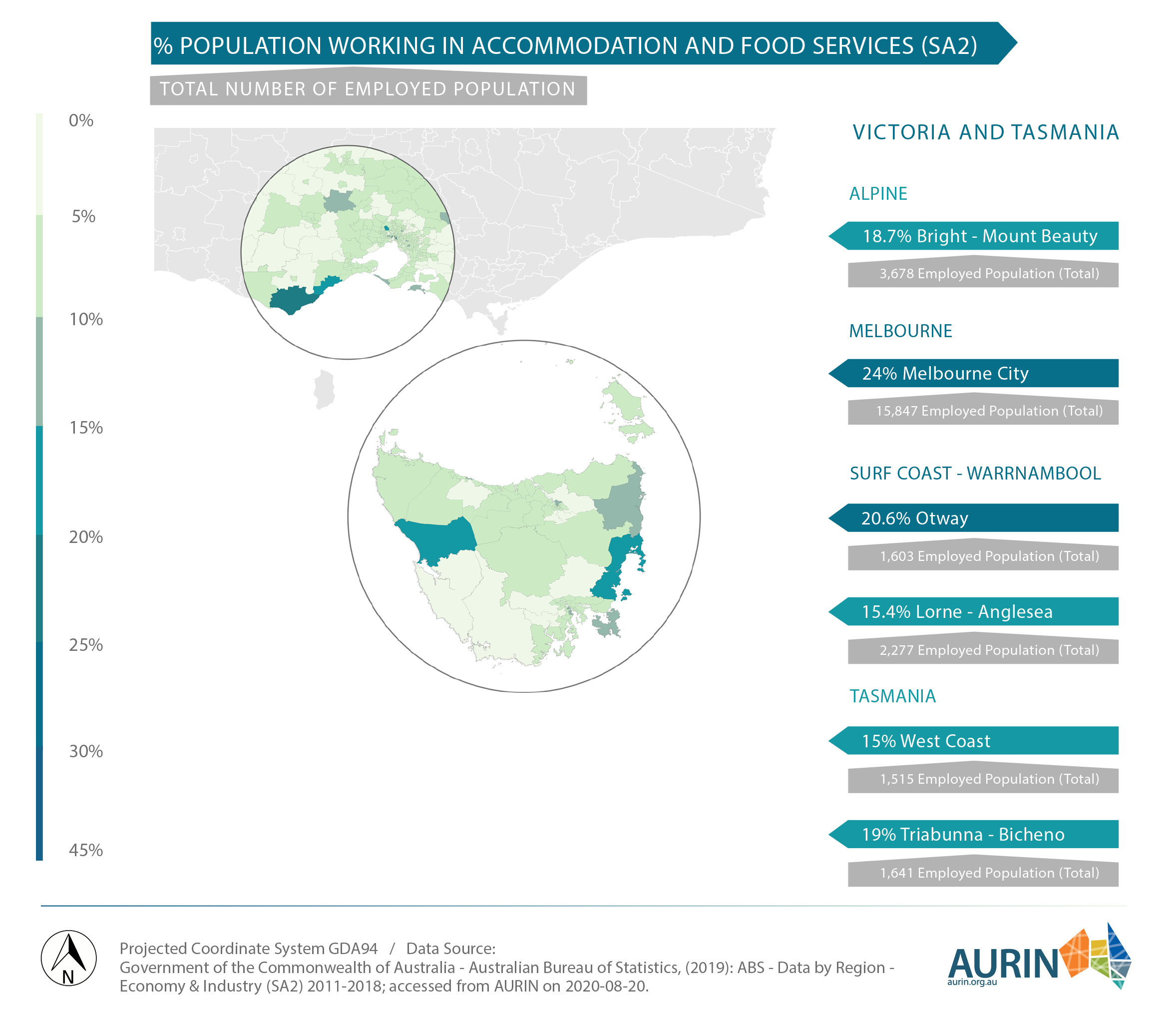 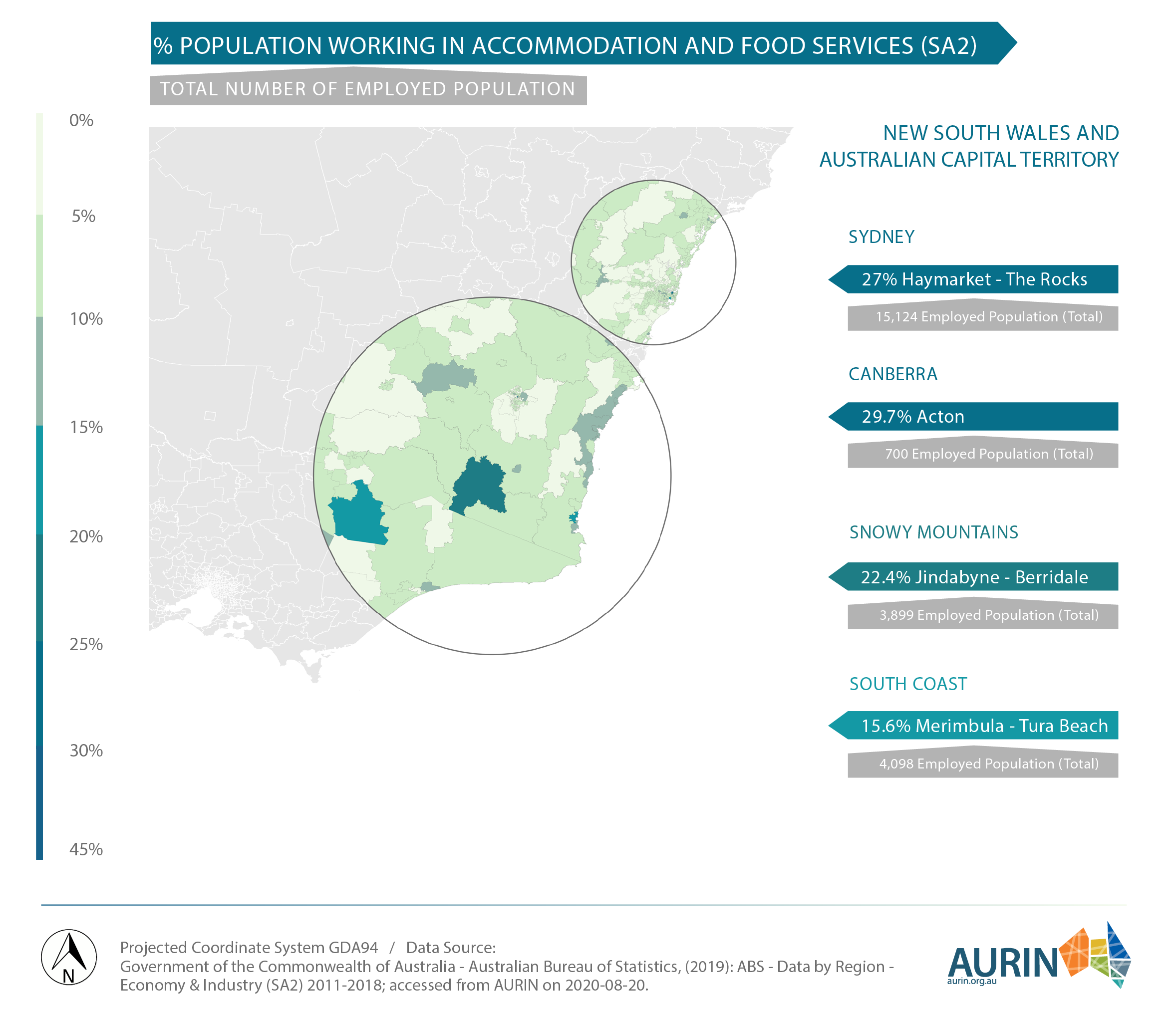 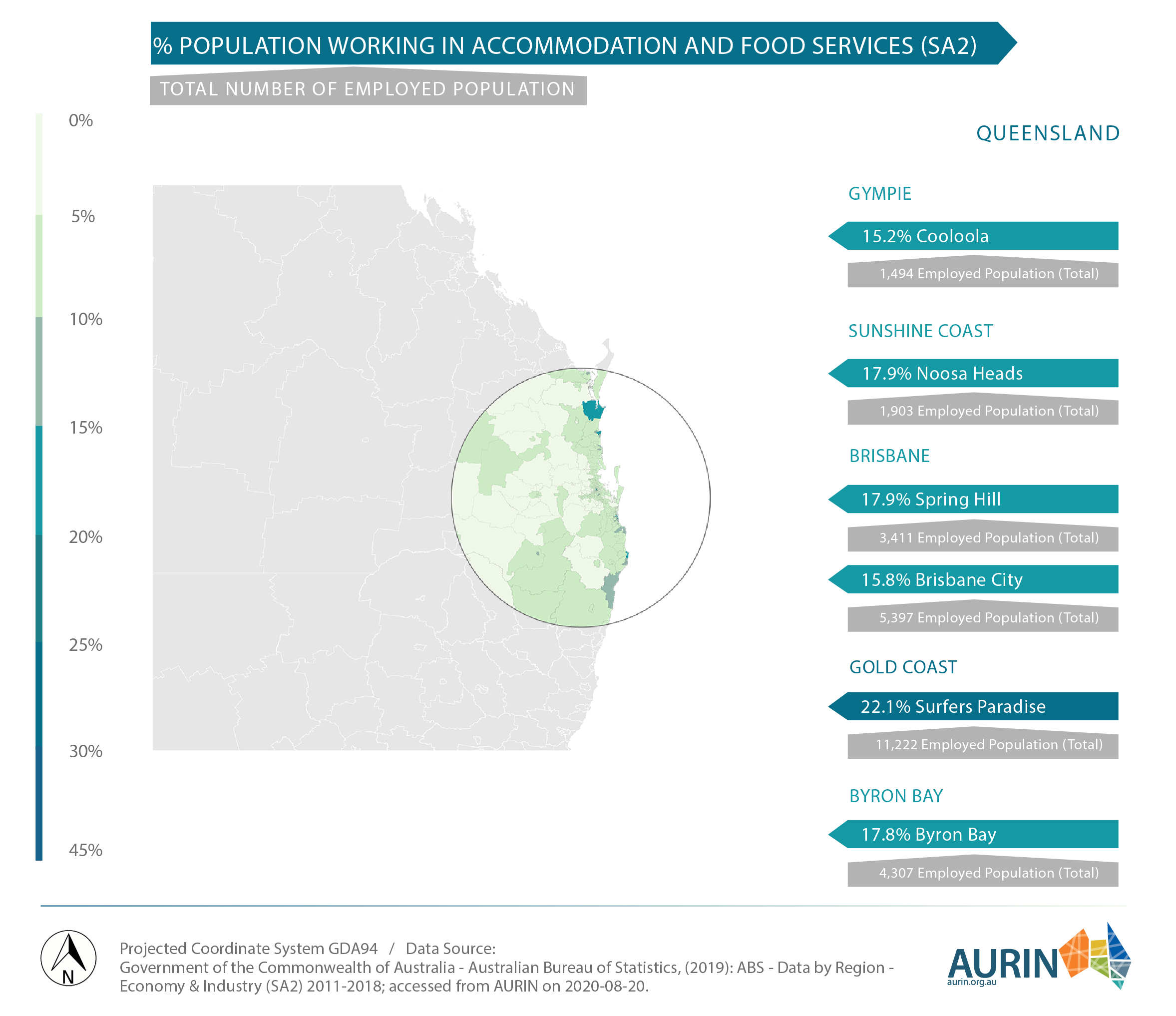 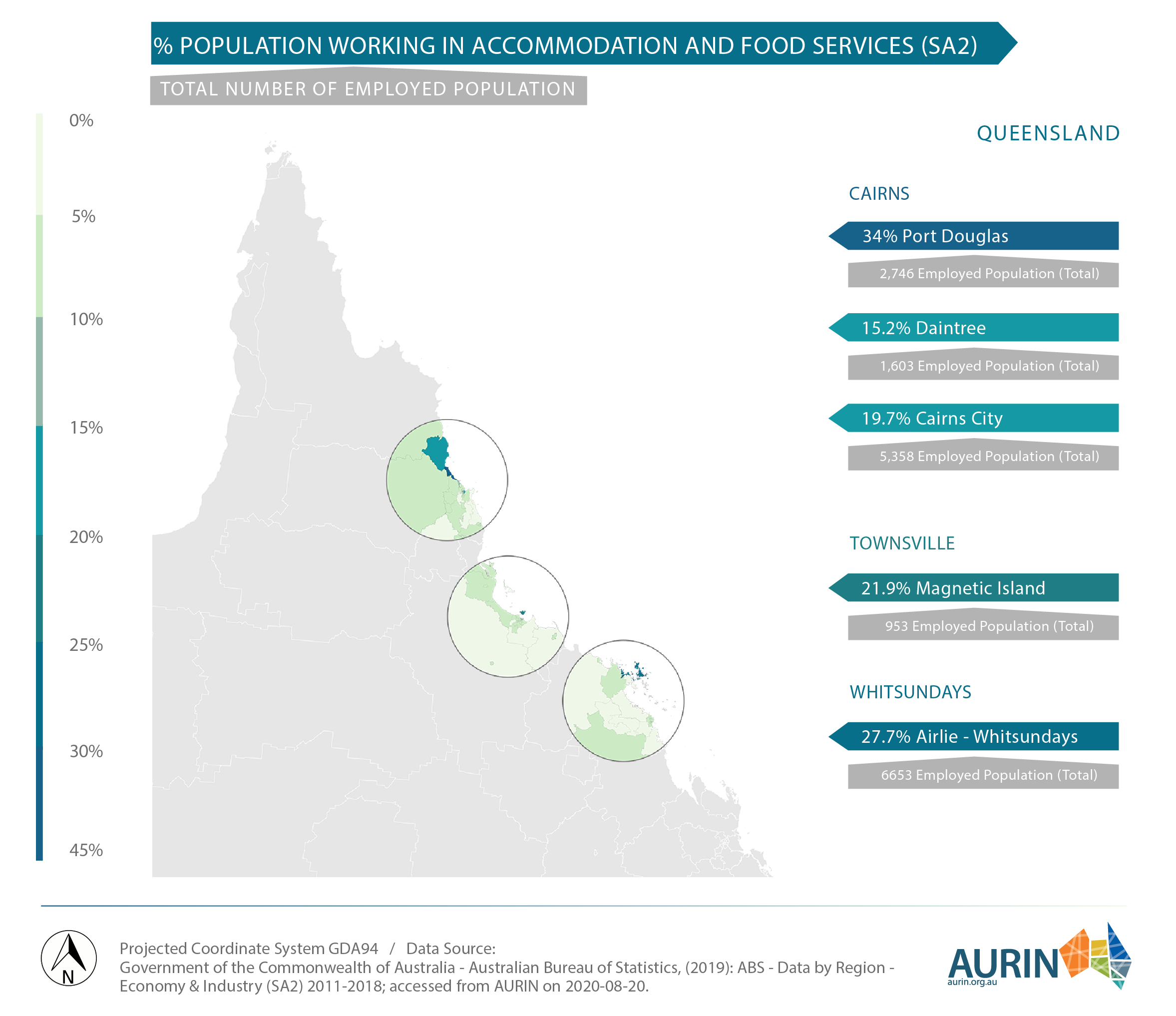 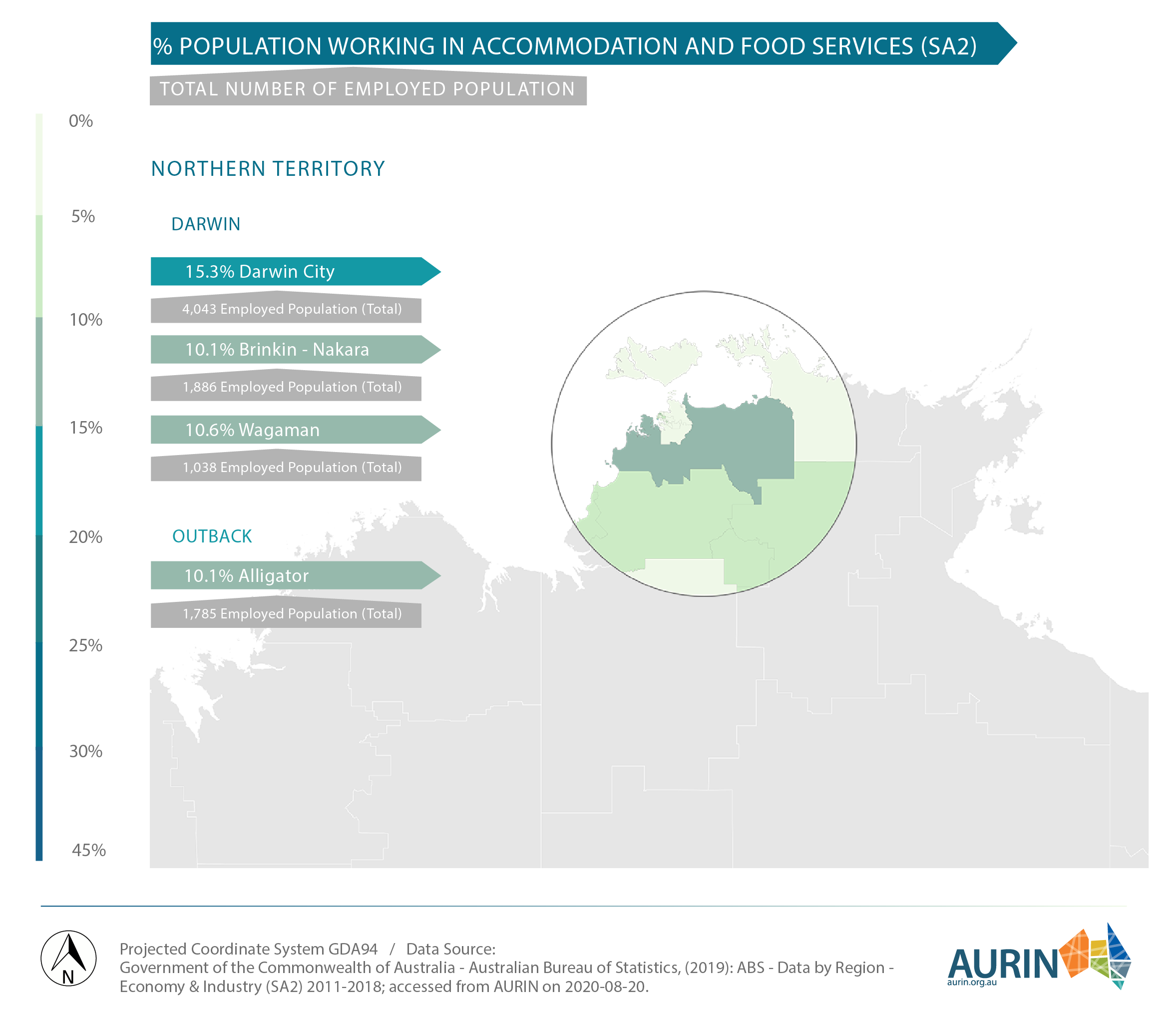 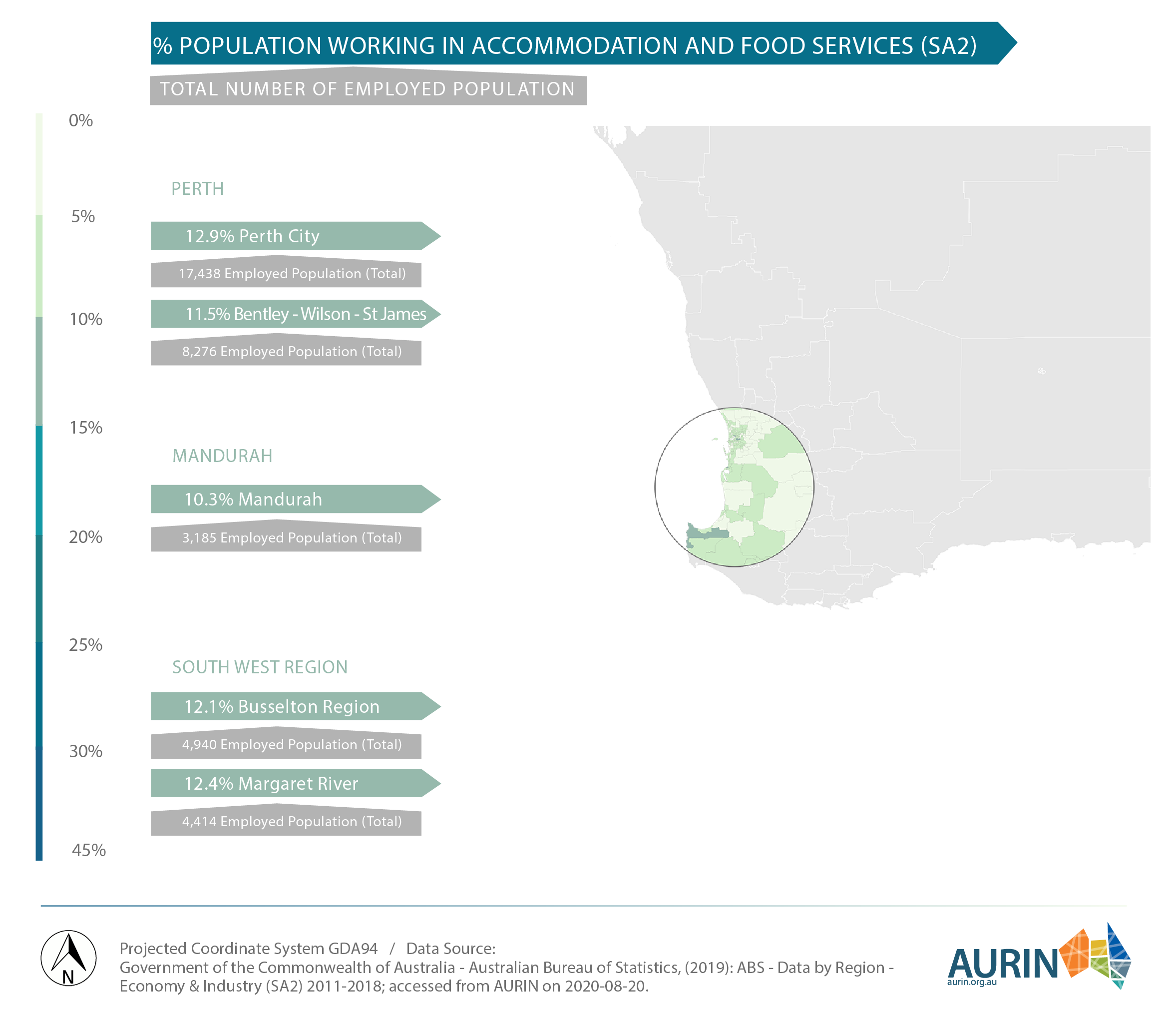 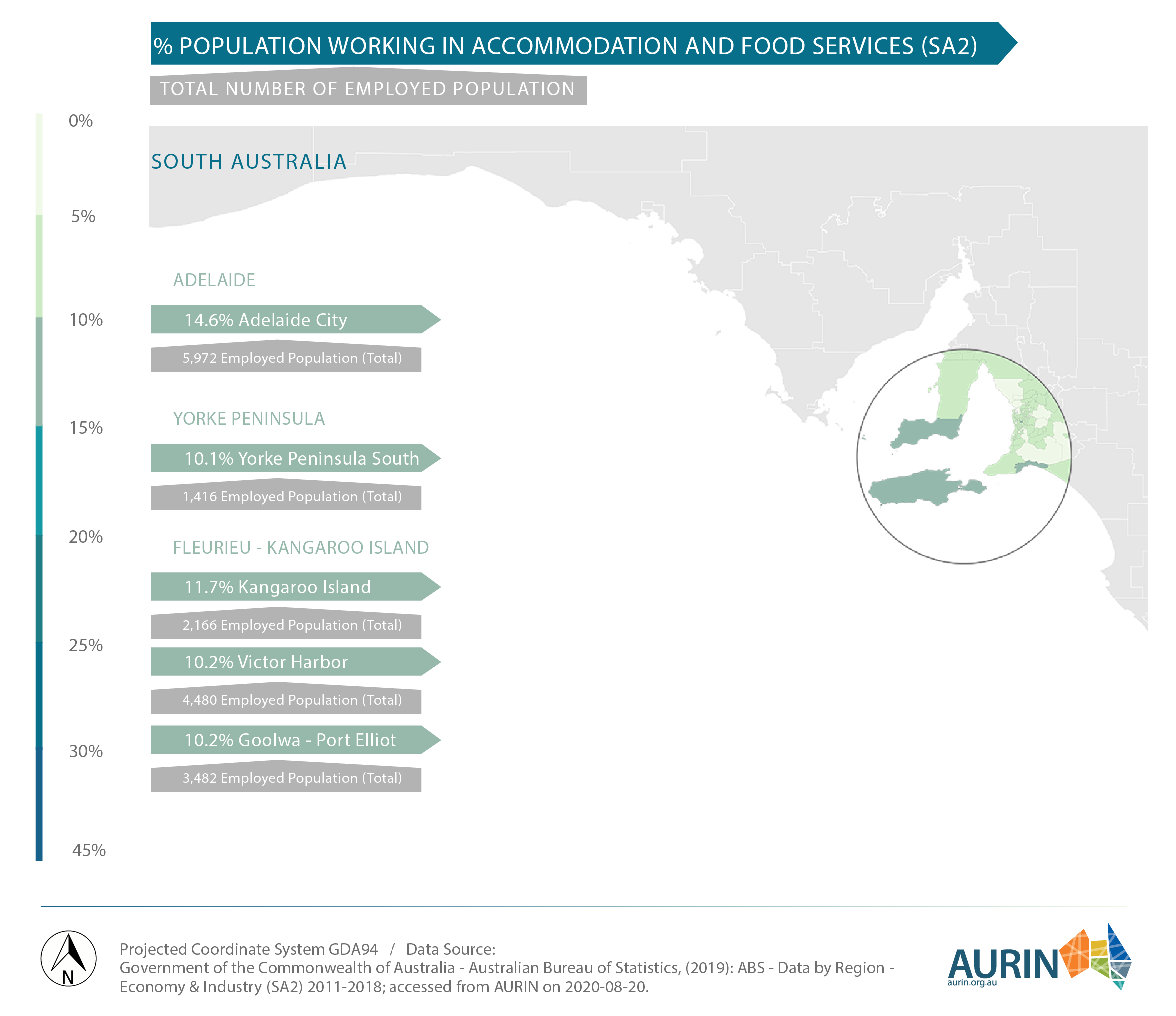 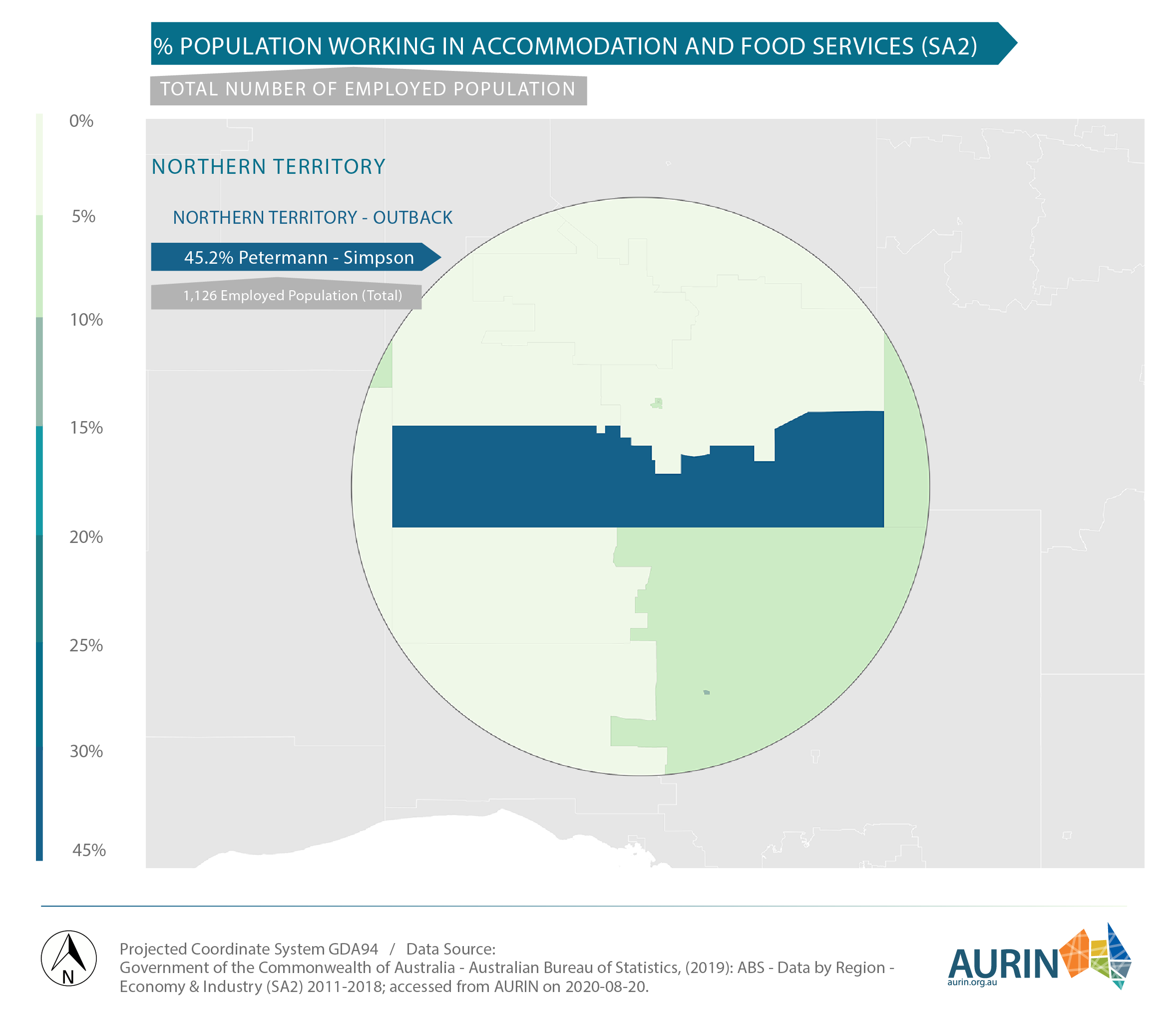 Investigating the ABS Weekly Payroll Index data reveals how different demographic groups experienced the impact of the pandemic, illustrating how vulnerable and resilient population groups within this sector (Figures 14 and 15). These insights allow decision-makers to shift efforts towards countering the effects on population segments who are more likely to experience hardship.

While overall job losses were observed nationwide, people aged between 20-39 have been the most affected (Figure 14). This may be explained by the hospitality industry recruiting young and potentially low-skilled workers for customer-facing jobs.

By the week ending 25 April almost 78% of people aged 20-39 were out of work—nearly 44% of 20-29 year-olds and 34% of 30-39 year-olds. Even as restrictions eased in most states and territories, these two age groups remained the slowest to recover. By the first week of August, there was a slight increase in jobs 19% and 14% respectively compared to 25 April.

Figure 15 (right) reveals employment disparities between genders, with 37% of the females in this sector being out of work by mid-April, while male workers recorded a job loss of 32%, reinforcing the statement that: 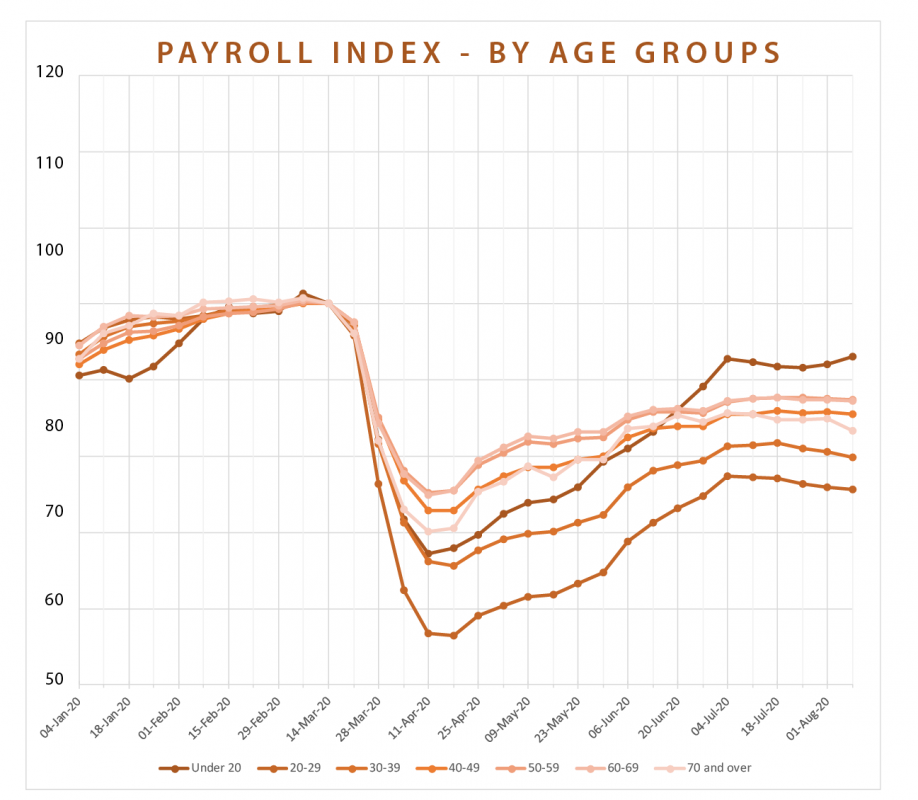 Please stay tuned for the next case study, as we will be showcasing the latest ABS Retail Trade data release for the month of July, including statistics for the Cafes, Restaurant and food services among other industry subgroups affected by ongoing trade and travel restrictions.

The COVID-19 pandemic continues to create employment vulnerability in many industries which creates a wide variety of research possibilities. We invite researchers to access AURIN and further explore this dataset, investigate how policies drive or decrease the demand for certain jobs and services, as well as contribute to a better understanding of the impacts of COVID-19 on Australian businesses and employment.