Outline of the Research

Determining how traditionally marginalised communities interact with urban space is central to understanding the role of cities in fostering individual and collective identities. The relationship between LGBT people and the city has been the focus of a considerable body of research, predominantly in a North American context. Researcher have focussed not only on the role of cities in allowing the expression of fully realised and authentic “queer” identities, but also the potential role that these groups have on the social and economic evolution of urban environments. While there has been some research undertaken within Australia, much of this has focussed on Sydney, and without much consideration for the potential differences between men and women. Using a wide range of data sources, Xavier Goldie from the University of Melbourne and RMIT University, investigated whether or not male and female same sex couples were spatially segregated from each other in Melbourne and Sydney, and if so, whether or not factors could be identified which could potentially explain these patterns. 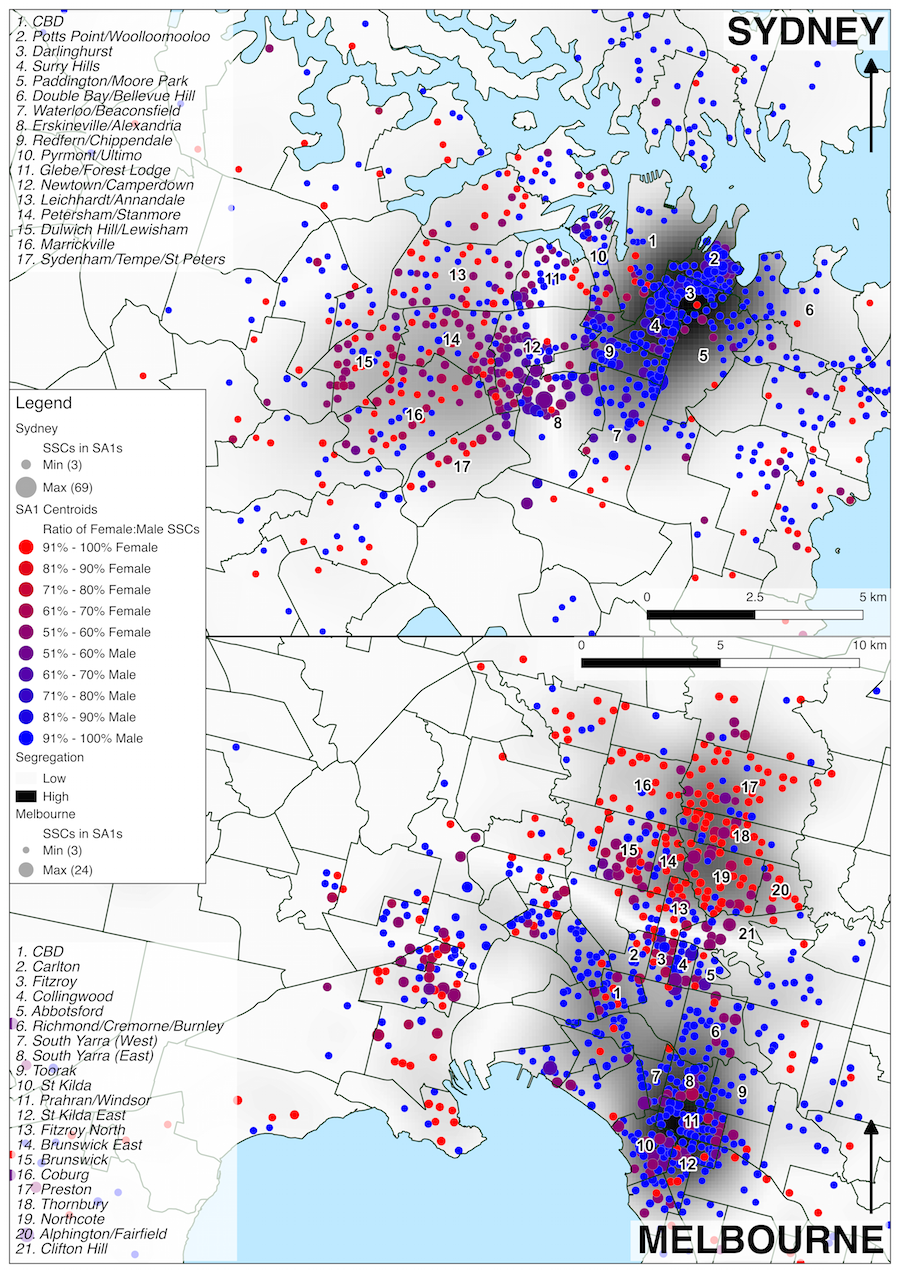 Mr Goldie used multi-variate spatial regression analyses in an attempt to identify factors which could explain some of the patterns observed. Much of these variables were sourced from the AURIN Portal, including data relating to ethnic diversity, housing diversity, property values (point level property sale data provided by APM), political party support, and land use. Additionally, the AURIN Portal provided the ideal platform to undertake the spatially-dependent regression analyses central to unpacking the influence of various factors, using the Spatial Statistics tool-kit deployed in the portal. As Mr Goldie explains, this research would likely not have been possible without the AURIN Portal as a central data and analytical resource

I undertook this research purely out of interest, and without any kind of funding, so I would not have been able to source the data without AURIN as my main port-of-call. The breadth of data available in AURIN, combined with other sources at the same level of geography easily allows the kind of multivariate regression methods central to answering these questions: especially a rich property value dataset at such a fine spatial resolution

The research indicated that male and female same sex couples are segregated from each other in both Melbourne and Sydney: identifiably “male” and “female” clusters of neighbourhoods can be found that are nonetheless adjacent to each other. The spatial regression analyses were able to identify a small number of factors which explained why male and female same sex couples aggregated together over larger spatial scales, but were not able to identify factors which caused this smaller scale segregation along lines of gender. Importantly, the research did not show any support for the “Creative Class” hypotheses which have emerged in the North American literature around these patterns. Future research could focus on the relationship between changes in these variables over time and shifts in the aggregation/segregation patterns, as well as qualitative research which focuses on the potential different sets of values and narratives between male and female queer residents.