How an eye in the sky can help make cities more walkable, liveable and resilient

CSIRO researchers have found a way to turn bird’s eye view photographs of our cities into useful digital maps that could help planners make our cities more liveable and provide emergency services with valuable information. 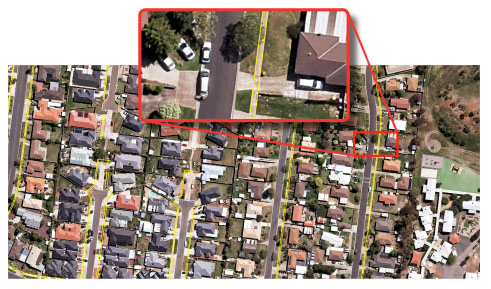 Dr Greg Foliente and his colleagues at CSIRO’s Liveable, Sustainable and Resilient Cities program have developed ‘Urban Sketcher’—a suite of algorithms that can recognise the patterns in aerial photographs of suburbs that indicate urban features, such as roads, buildings, footpaths, gardens and lawns, and take accurate measurements of their dimensions.

“In the past, urban planners have had to make decisions based on low resolution satellite images of urban areas.”

But information about the dimensions of footpaths and driveways turns out to have another vital use: it can show emergency services how and where they can gain access to homes, buildings, parks and other areas in emergency situations.

“The map layers are detailed enough to show the width of a footpath,” Greg says.

The current industry practice is to take light radar or ‘LiDAR’ scans of urban areas from aircrafts flying at low altitude. While accurate, it’s an expensive approach—about $3.5 million per citywide scan.

“What’s new about our unique approach is that we’re able to read and interpret high altitude aerial photographs, which are around eight times cheaper to produce than LiDAR,” Greg says.

High altitude aerial surveying is already the preferred approach for many local and state government agencies, so Urban Sketcher could ultimately help governments and researchers make far greater and richer use of an existing resource.

“LiDAR runs are only done once every few years,” Greg says.

“In contrast, the Victorian Government gets three high altitude aerial surveys of Melbourne each year. And we have this photography with decent resolution going back to 2006, so the data we can and have mined could be very useful for exploring how our cities are rapidly changing.”

Map layers detailing building footprints are next for the Melbourne Urban Capture project. CSIRO researcher Felix Lipkin says this will have important applications in understanding and projecting the energy and water resource use of households, and in urban resilience and disaster management and planning.

“When people measure the resilience of a building for flooding or coastal inundation during storms, they measure the envelope and orientation of the building.”

“Similarly, if an insurance company is interested in bushfire risk, they will check the direction wind or fire might come from, and they can actually assess whether a house is at risk and what might be done to reduce that risk.”

The original aerial imagery for metropolitan Melbourne was produced for the Victorian Department of Transport, Planning and Local Infrastructure. The CSIRO team has processed these maps into GIS layers of footpaths and building footprints and made these available through the AURIN Portal, where other urban datasets have also been made available and integrated for research use.