Moran’s I is a global measure of spatial autocorrelation across an entire study area. The Moran’s I statistic provides an indication of the degree of linear association between the observation vector (x) and a vector of spatially weighted averages of neighbouring values (W_x), where W is the spatial weight matrix which formalises the neighbourhood or contiguity structure of the dataset (Moran, 1948).

Moran’s I is calculated as:

Where R is the number of regions in the dataset; R_b is the sum of the weights which simplifies to R if the spatial weight matrix is row-standardised; x_i is the variable that we are testing and is measured as deviation from the mean, i.e. x_i=X_i-\bar{X}. The location variable for the area’s proximity is given by w_{ij} which is the element from the corresponding spatial weight matrix.

The Moran I statistic can be expressed as a standardised normal z-value for inference purposes, computed by:

Anselin (1992, p. 134) points out the different assumptions that can be made about the data that effect the calculation of the standard deviation. The component allows for the standard deviation to be calculated under the assumption of randomisation or normality, both of which allow the computed z-value to follow a normal distribution (asymptotically), so its significance can be evaluated by means of a standard normal table. Alternatively, a user may prefer either a Saddlepoint approximation (Tiefelsdorf, 2002) or an exact test (Tiefelsdorf & Boots, 1995) which are also provided in the tool’s output. In general, these make little difference to the significance of global tests unless R is quite small.

This interpretation of Moran’s I easily translates to a bivariate scatterplot with x on the x-axis, W_x on the y-axis and Moran’s I being the slope of the linear best fit. The scatterplot is useful in identifying those observations that do not conform, and that differ significantly from the global Moran’s I in magnitude and/or direction. The scatterplot centres on the point where the mean of the variable meets the mean of the lagged variable, and the four quadrants of the plot relative to this point give information about the type of association that is present. The upper right and lower left quadrants represent positive spatial association, while the upper left and lower right quadrants show those observations that have negative spatial association. The densities of each of the quadrants indicate which spatial pattern dominates and also provides information on the distribution of the individual spatial associations and the contribution of each to the global statistic. Further, the plot shows outliers and leverage points and can provide an overall picture of the consistency of the global indicator.

To demonstrate this tool in use, we will look at socio-economic disadvantage data in Greater Perth to examine the degree of spatial-autocorrelation.

Select ABS – Socio-Economic Indexes for Areas (SEIFA) – The Index of Relative Socio-economic Disadvantage (SA2) 2016 as your dataset, select IRSD Score as the variable.

Open the Moran’s I tool (Tools → Spatial Autocorrelation → Moran’s I) and enter the following parameters:

Once the tool has finished, tick both boxes and click Display Output. This will open up two outputs.

The first output is a data file that you can map, containing your input variables and the following:

The second output is a text window with a matrix of outputs for your Moran’s I test under all of the different conditions: 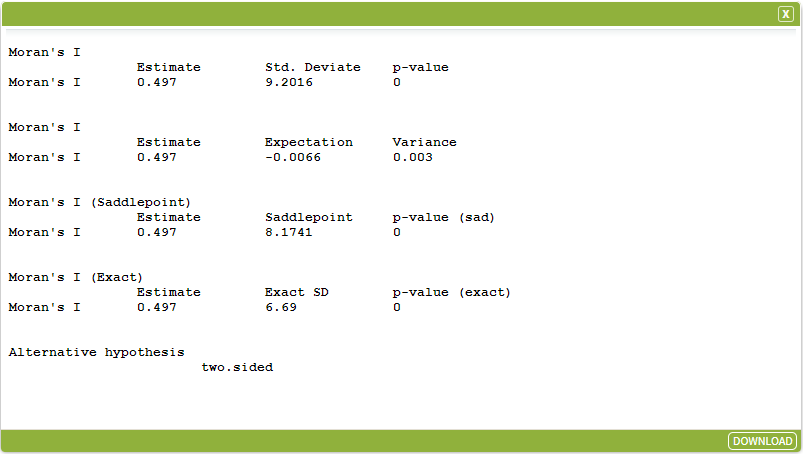 Anselin, L. (1992). SpaceStat Tutorial: A workbook for using SpaceStat in the analysis of spatial data. UC-Santa Barbara: Department of Geography.