Local Moran’s I is a local spatial autocorrelation statistic that identifies local clusters or local outliers to understand their contribution to the ‘global’ clustering statistic. It was developed by Anselin (1995) as a class of local indicators called Local Indicators of Spatial Association (LISAs). The local Moran’s I statistic offers insight into the behaviour of data at local levels, by providing a decomposition of the Moran’s I global statistic into the degree of spatial association associated with each observation. LISAs serve two purposes in exploratory spatial data analysis (ESDA): they indicate local spatial clusters and they perform sensitivity analysis (identify outliers).

a. the LISA for each observation gives an indication of the extent of significant spatial clustering of similar values around each observation; and
b. the sum of LISAs for all observations is proportional to a global indicator of spatial association.

As with global measures, LISAs test whether the observed spatial pattern of a variable of interest amongst areas is extreme or is likely or expected, given a random geographic distribution of the variable.

Local Moran’s I is calculated as:

Significance testing of the local Moran statistics can be somewhat problematic. Unlike the G_i and G_i* statistics, the local Moran does not conform to a common distribution and so the test under a normality assumption should be treated with caution. Instead Anselin (1995) suggests a conditional randomisation or permutation approach to give so-called pseudo significance levels. Tiefelsdorf & Boots (1998) published the exact reference distribution of Moran’s I, but in a later paper recommends an application of the Saddlepoint approximation, as it “outperforms other approximation methods with respect to its accuracy and computational costs” (Tiefelsdorf, 2002, p. 187). The Local Moran’s I tool in the AURIN Portal provides results for a normal distribution, a Saddlepoint approximation of the standard deviate and the exact standard deviate.

To demonstrate this tool in use, we will look at socio-economic disadvantage data in Greater Darwin to examine the extent of spatial-autocorrelation.

Select ABS – Socio-Economic Indexes for Areas (SEIFA) – The Index of Relative Socio-economic Disadvantage (SA1) 2016 as your dataset, select IRSD Score as the variable.

Your output will be a dataset that can be mapped based on a number of the variables produced by the analysis. These are explained below:

You can create a visualisation using the Choropleth tool on one of the above variables. For the image below, we have chosen to use the variable irsd_score_map_group_name. The tool produces five groups in this variable, listed above. Using a Qualitative and Dark2 palette: 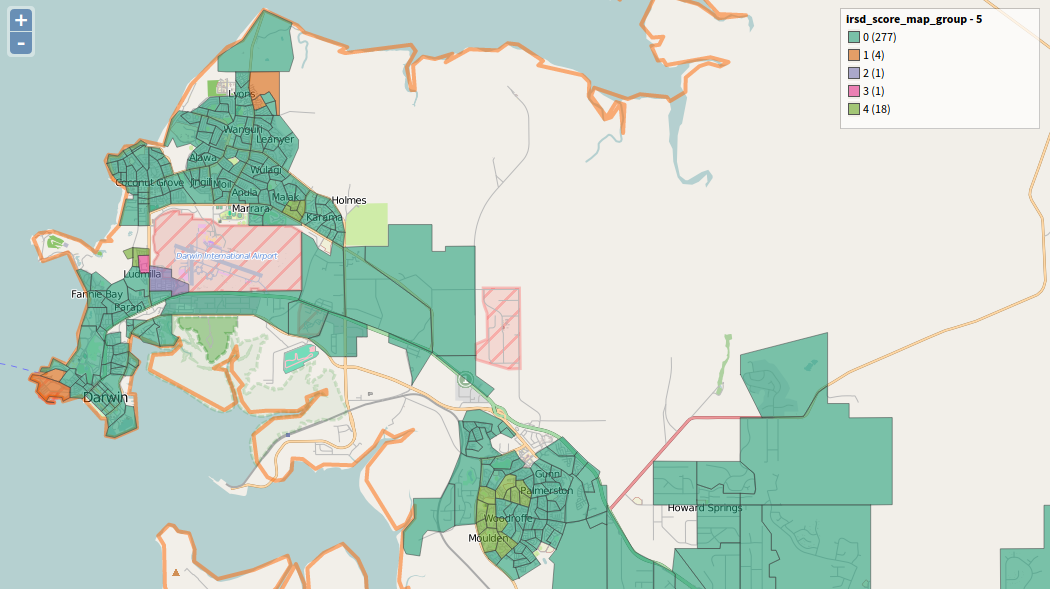