The G_{i} statistics are known to be useful for identifying “hot and/or cold spots” and to check for heterogeneity in the dataset. G_{i} (Getis and Ord, 1992) statistics are the ratio of the sum of values in neighbouring locations, defined by a given distance, to the sum over all observations. A global variation can be calculated with the Getis-Ord Global G tool.

Like Local Moran’s I, G_{i} statistics can detect local ‘pockets’ of dependence that may not show up when using global statistics, for example, they isolate micro-concentrations in the data which are otherwise swamped by the data’s overall randomness. The form of the X matrix is additive, either (X_{j}) or (X_{i} + X_{j}) for the self-included measure. This contrasts with the Moran statistic where the matrix is in the form (X_{i} - \overline{X})(X_{j}- \overline{X}) or Geary’s C which specifies the matrix in the form (X_{i} - X_{j})^2. As G_{i} measures are measures of concentration, they are in contrast to the Moran statistic which examines the correlation or covariance of values in neighbouring regions compared to the data’s overall variance (while Geary’s C calculates differences). G_{i} statistics evaluate association by examining ‘additive qualities’ (Getis and Ord, 1996, p. 262), they compare local weighted averages to global averages to isolate ‘coldspots’ and ‘hotspots’.

A special feature of this statistic is that it equals 0 when all X values are the same. Also while the weighted value of an X value might be expected to rise with the number of neighbours (or weighted regions), all else equal, a region that has a greater number of neighbours does not receive a greater G_{i}. Only when the observed estimate in the vicinity of the region i varies significantly from the mean of the variable does G_{i} rise (Getis and Ord, 1992).

A slightly different form of G_{i} was suggested by Ord and Getis (1995), G_{i}(d) originally proposed for elements of a symmetric binary weights matrix, was extended to variables that do not have a natural origin and to non-binary standardised weight matrices (Ord and Getis, 1995, p. 289). This statistic for each region i is:

The results firstly produce the G_{i}; for each area i as a standardised z-value. Getis and Ord (1992) argued that inference, as with global measures are based on calculating a standardised value and comparing this against a null which is assumed to follow a normal distribution. However a normally distributed null may not be an appropriate assumption, as Local G_{i} are not independent of each other by design (Ord and Getis, 1995). By definition one region may appear in a number of different region’s weighting vectors. This raises the general issue that for local measures of spatial autocorrelation inference is complicated as statistics will be correlated when weights contain the same elements which they do. This is a problem of multiple statistical comparisons and reflects “the built-in correlatedness of measures for adjoining locations” (Anselin, 1995, p. 112). This requires a more stringent test to be able to assert spatial non-randomness, that is, to assert the presence of spatial autocorrelation at the local level. Anselin (1995, p. 96) notes “This means that when the overall significance associated with the multiple comparisons (correlated tests) is set to \alpha, and there are m comparisons, then the individual significance \alpha_{i} should be set to \alpha/m (Bonferroni) or 1 - (1 - \alpha)^{1/m}

Once this has been completed, continue to the next section for instructions on using the tool.

Your output will be a dataset that can be mapped based on a number of the variables produced by the analyses. 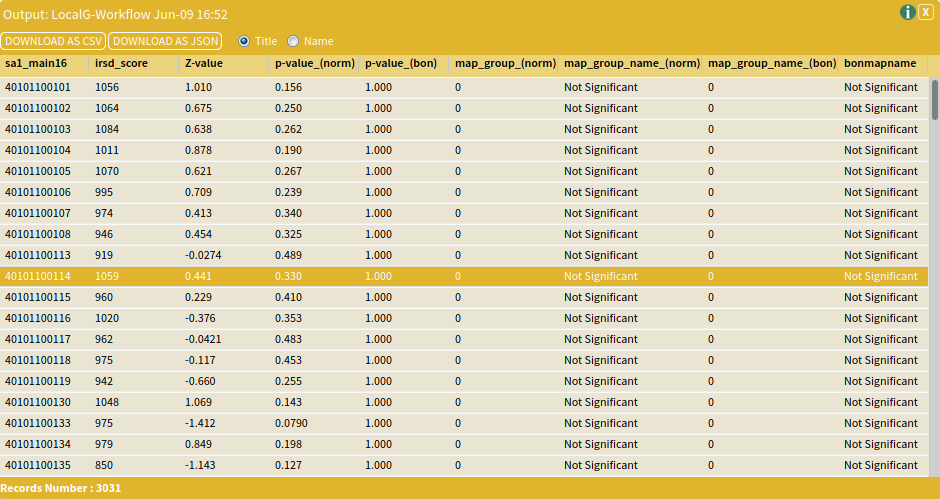 These are explained below

You can create a Choropleth of these variables. For the image below, we have chosen map_group_name(norm), using 3 classes, and a Qualitative, Dark2 palette. Green indicates SA1s of high index scores (low disadvantage) clustered together, orange indicates low index scores (high disadvantage), and purple indicates non-significant clusters. 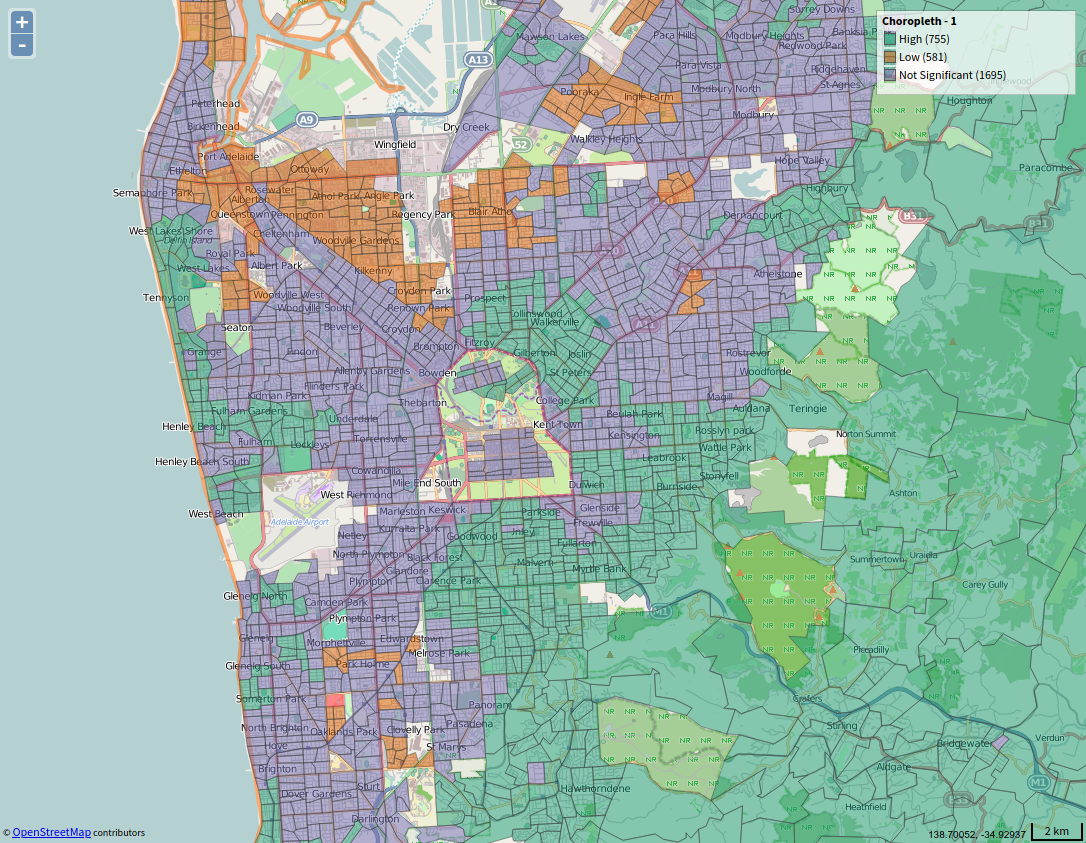