Geary’s C is a measure of clustering (or spatial autocorrelation) of a variable, and is computed by (Cliff and Ord, 1981):

While Moran’s I is based on the cross-products of the deviations from the mean, Geary’s C is based on the deviations in responses of each observation with one another. This in effect means that Moran’s I is more sensitive to extreme values and is more a global measure, whereas Geary’s C is more sensitive to differences between values in neighbouring areas.

To demonstrate this tool in use, we will look at socio-economic disadvantage data in Greater Darwin to examine the extent of spatial-autocorrelation.

Select ABS – Socio-Economic Indexes for Areas (SEIFA) – The Index of Education and Occupation (SA2) 2016 as your dataset, selecting the following variables:

Once the tool has run, click the Display button on the pop-up dialogue box that appears. This will open a window with the outputs of your Geary’s C calculation, which should look like the image below. 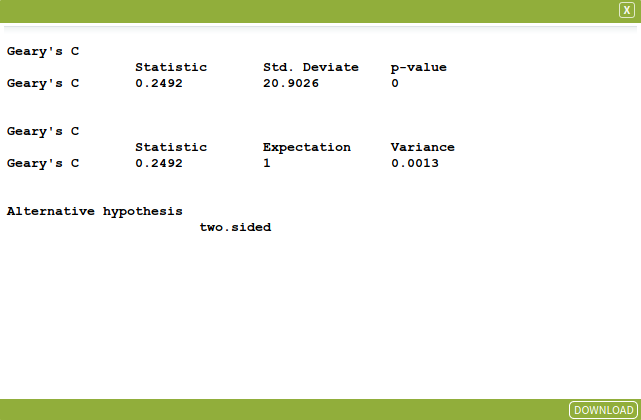