Bivariate Moran’s I is a global measure of spatial autocorrelation to measure the influence one variable has on the occurrence of another variable in close proximity. Whereas the original Moran’s I statistic measured the degree of linear association of the values of a variable in neighbouring regions. The Bivariate Moran’s I statistic provides an indication of the degree of linear association between one variable, x, and a different variable in neighbouring regions \sum_{j}y_j w_{ij} (but not in the same region).

Bivariate Moran’s I is computed as:

Where R is the number of regions in the dataset; R_b is the sum of the weights which simplifies to R if the spatial weight matrix is row-standardised; x_i is the first variable and is measured as deviation from the mean, i.e. x_i=X_i-\bar{X}; y_i is the second variable and is also measured as deviation from the mean, i.e. x_i=Y_i-\bar{Y}. The location variable for the area’s proximity is given by w_{ij}, which is the element from the corresponding spatial weight matrix.

In a similar way to Moran’s I, the Bivariate Moran’s I statistic is expressed as a standardised normal Z-score for inference purposes, computed by:

Inference for Bivariate Moran’s I is based on the standardised normal Z-score (null hypothesis = spatial randomness). However, due to the statistic’s asymptotic normality (that is, as n increases, the actual distribution of the test statistic gets closer to the normal distribution) small sample sizes (n<40) should be interpreted with caution, as the assumption of normality may not be valid (Czaplewski & Reich, 1993). For small sample sizes permutation based approaches should be used.

To demonstrate this tool in use, we will look at the association between education and employment in Greater Brisbane to examine the degree of spatial-autocorrelation.

Once the tool has finished, tick both boxes and click Display Output. This will open up two outputs.

The first output is a data file that you can map, containing your input variables and the following: 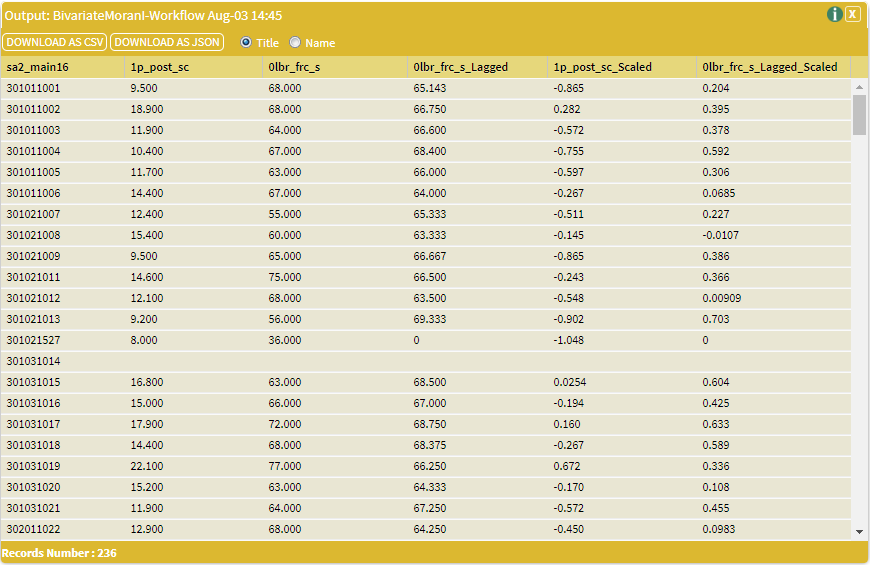 The second output is a text window with a matrix of outputs for your Bivariate Moran’s I test: 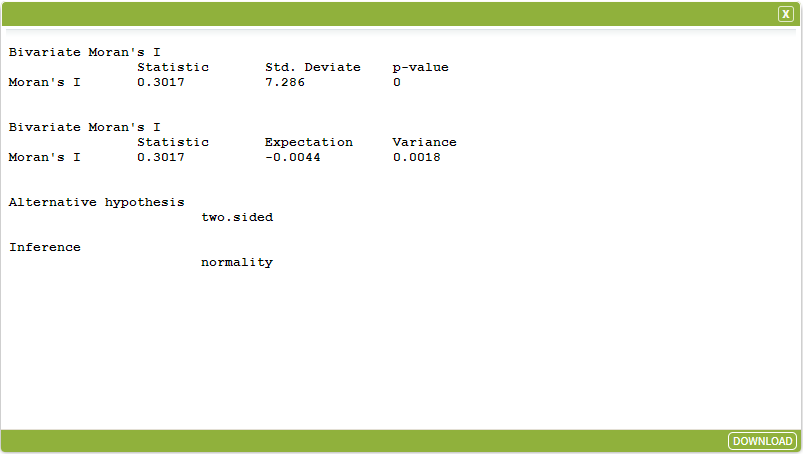 The results show that the Bivariate Moran’s I value is positive but low, and is also significant (P < 0.05). Therefore, we can reject the null hypothesis (no spatial autocorrelation), and accept the alternative hypothesis that there is a low positive relationship between persons with bachelor degrees and labour force participation. This indicates that higher percentages of persons with bachelor degrees tend to be spatially correlated with higher rates of labour force participation at neighbouring SA2s.