The Theil Index is a common measure of concentration and dispersion. It has historically been used to measure income inequality, but in effect can be used to measure the dispersion of any variable across regions relative to the whole (Akita and Kawamura, 2002). It is calculated as follows:

Where y_{i} is the count of the variable of interest (such as number of unemployed people) in area i, Y is total count of that variable of interest across the entire study area, n_{i} is the total population count in region i, and N is the total population count across the entire study area.

The resulting index can range from 1 to the natural log (ln) of the number of categories, n (in this case, the number of areas within the study area). It is common to standardise the index so it can range between zero and one, which is done by dividing by ln(n). A Theil Index of zero indicates perfect equality and every region has the proportion for the population. Conversely, a standardised Theil Index value of one represents a state of perfect inequality, where one region has all of the variable of interest.

To show the Theil Index tool in use, we will run it to calculate the coefficients for the distribution of female youth unemployment across Western Australia.

Once you have selected these, open the Theil Index parameter input window (Tools → Indices → Theil Index) and enter the parameters as in the image shown below (these are explained in more detail below the image).

Once you have run the tool, click the Display Output button that appears on the pop up dialogue box. This should open up a text box like the one shown below, which has the Theil Index values for your variable (raw and standardised). In this instance, we have a standardised value of 0.0069, which suggests low inequality in the distribution of female unemployment in WA. 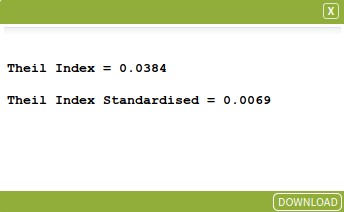