The Gini coefficient represents the income or wealth distribution of an area’s residents, and is the most commonly used measure of inequality. It was developed by the Italian statistician and sociologist Corrado Gini and published in his paper Variability and Mutability (Gini, 1912).

A Gini coefficient of zero expresses perfect equality, where all values are the same (for example, where everyone has the same income). A Gini coefficient of 1 (or 100%) expresses maximal inequality among values (e.g., for a large number of people, where only one person has all the income or consumption, and all others have none, the Gini coefficient will be very nearly one). However, a value greater than one may occur if some persons represent a negative contribution to the total (for example, having negative income or wealth). For larger groups, values close to or above 1 are very unlikely in practice. 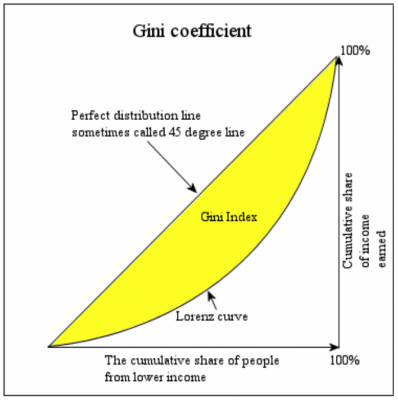 where the values y_i,i=1 to n are the income levels in indexed in non-decreasing order and n is the population size.

For a random sample, the numerator is the sample size less one. Hence, for a measure of inequality of unemployment across regions, the Gini Coefficient becomes:

where u_i,i=1 to r are the unemployment rates indexed in non-decreasing order and r is the number of regions. This is a consistent estimator of the Gini Coefficient, though not an unbiased one.

To show the Gini coefficient tool in use, we will run it to calculate the coefficients for the distribution of male youth unemployment across NSW:

Once you have run the tool, click the Display output button that appears on the pop-up dialogue box. This should open up a text box like the one shown below, which has the Gini coefficient value for your variable. In this instance, we have a coefficient of 0.189, which suggests a low inequality in the distribution of youth male unemployment in NSW SA2 regions. 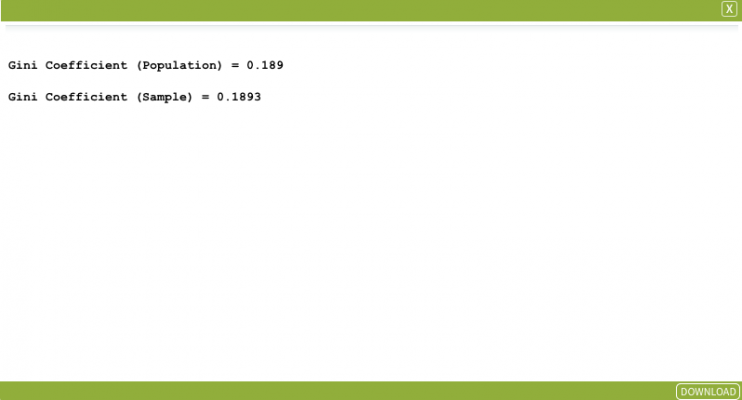