The Filter by Attribute tool allows you to keep some parts of a dataset based on their values.

For example, you may only want to keep part of the dataset where the value of Variable X is greater than 2, and exclude the remainder of the dataset.

For this worked example, we use filter some population data from the ABS – Data by Region dataset across the Northern Territory’s SA2 regions. A study we are working on is only interested in the SA2 regions with a population of 5,000 or more, counted in the 2016 census, so we will filter

Select the Northern Territory (ste/7) as your area.

Once you have set up your data, open the Filter by Attribute tool (Tools → Data Processing → Filter by Attribute). We want to exclude all values that have less than 5000 residents. The input fields we will set for this are as follows:

Once the tool has run, click the Display button on the pop-up dialogue box that appears. This will open a window with the outputs of your Filter by Attribute tool which should look like the image below.

The output of our dataset will include only the SA2 regions in the Northern Territory that, at the time of the 2016 census, have a population of 5000 or higher. For this example, we have eleven SA2 regions. 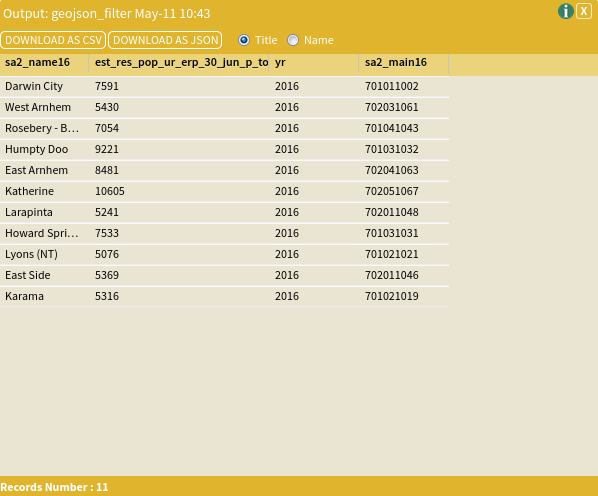