A way to mine Twitter data to identify real-time traffic jams and accident black spots has been developed by University of Melbourne researchers. 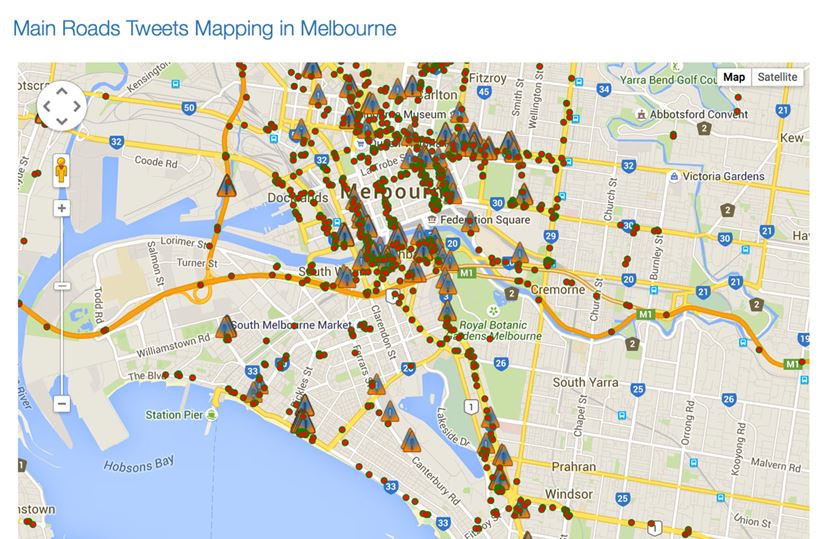 These ‘tweets from the streets’ could give urban planners the big data they need to make our transport systems more efficient, identify accident black spots and make our cities more liveable.

“We have built a way to harvest Twitter data while people are on the roads. It’s a controversial idea, because people shouldn’t be tweeting while they’re driving,” says Richard Sinnott, Director of the Melbourne eResearch Group.

“We’ve written a set of algorithms that identify tweets that originate on the road system. You can write an algorithm that moves along CityLink or the West Gate Bridge in Melbourne, or the Southern Expressway south of Adelaide, checking for tweets in each small section of the road.”

Richard and his colleagues and students do their analysis using Australia’s road system data, available through the AURIN Portal. But for this research they’re not actually reading the tweets.

“We’re not interested in what they’re tweeting about, whether it’s ‘I’m stuck in a traffic jam’ or ‘I had bacon and eggs for breakfast’,” Richard says.

“The fact that they’re tweeting and, for example, they’re on CityLink is meaningful.”

The assumption is that people will tweet while on our road network if they’re in a traffic jam, if they’re stopped, or if they’re a passenger.

“We write software that can identify clusters of tweets in space and in time. Several tweets over 15 minutes from different people in the same location could indicate something going on there—traffic building up or an accident. From this, we can identify accident black spots and traffic jams in real time.”

“Our results compare well with official data for accident black spots from VicRoads.”

A typical 140 character tweet has nine kilobytes of data and metadata, such as your profile information, who you follow, who follows you, what language you’re tweeting in, what device you’re tweeting with and, if geolocation services are turned on, where you’re tweeting from. Richard says this data has huge potential.

“You can use this real-time data to capture what is really happening, so that policy decisions can be driven by what we know, rather than what we think we know. If you’re going to build a new roadway, buildings, or largescale infrastructure, you want to know which people are there and that they will be well serviced.”

Professor Richard Sinnott is Director of eResearch at the University of Melbourne and Professor of Applied Computing Systems in Computing and Information Systems Department, Melbourne School of Engineering