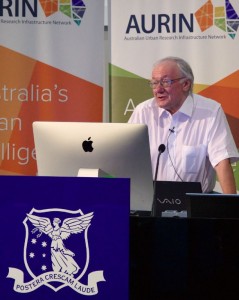 How do urban system models, smart cities and big data can help shape our urban future?

Professor Michael Batty—winner of geography’s equivalent of a Nobel, the Vautrin Lud Prize—discussed how big data and decision science can predict and shape our changing cities. This was the key public event for Mike’s visit to Melbourne, arranged in partnership with CSIRO.

For more than fifty years planners have been using computers to predict future land use, traffic, and energy management. But cities and our behaviours within them are changing so dramatically it is hard for our science to keep up.

Now we have both the complex modelling tools and the data—generated by technology embedded in day-to-day urban life—to make scientific urban modelling feasible and incredibly valuable. In Australia, for example, AURIN – (Australian Urban Research Infrastructure Network) is providing urban researchers and government policy analysts with large scale data, analytical tools and methods to make data driven decisions to improve our cities and regions.

Professor Batty’s lecture explores ‘the good, the bad and the ugly’ elements of this change, illustrated with a number of studies of how smart cities technologies are infusing, informing and potentially confounding planning in London.

The ‘good’ sees how computer models of urban systems have been revolutionised in recent years into contemporary models, integrated via the web and cloud computing. The ‘bad’ shows how big cities are not necessarily smart cities. The ‘ugly’ relates to the potential for inequalities in growing and increasingly automated cities and the other future challenges, such as climate change.

The event saw Professor Batty joined by a panel of Australian experts to discuss the local implications of this kind of data and research for cities, policies and decision making.

Michael Batty is Professor of Planning at the University College London (UCL), Founding Director and now Chairman of the Center for Advanced Spatial Analysis (CASA) Lab. A world-renowned pioneer in computer modeling of urban systems, he was awarded the 2013 Lauréat Prix International de Géographie Vautrin Lud (the so-called “Nobel for geography”).

He is the editor of the journal Environment and Planning B: Planning and Design, and author of numerous books – including the New Science of Cities (MIT Press, 2013), the Cities and Complexity (MIT Press, 2005), Virtual Geographic Environments (Science Press, China, 2009) and another 12 monographs and books.

Among his numerous other awards, he received a CBE in the Queen’s Birthday Honours in 2004 for “services to geography”, is a Fellow of the Royal Society in 2009, and is the recipient of the 2010 Alonso Prize of the Regional Science Association and the 2015 Gold Medal (the Founder’s Medal) recipient of the Royal Geographical Society.

Professor Kate Auty is a Vice-Chancellor’s Fellow at the University of Melbourne, a Member of the Australian Urban Research Infrastructure Network, and the Chair of the Advisory Board for the Melbourne Sustainable Society Institute. Prior to this, she was the Victorian Government Commissioner for Environmental Sustainability.

Professor Mark Burry is an architect and academic. He is a Professor in Urban Futures at the Melbourne School of Design. Mark’s research has an emphasis on architecture and technology, including historical and cultural implications. Originally from New Zealand, Mark was previously the Professor of Innovation and Director of the Spatial Information Architecture Laboratory and founding Director of the Design Research Institute at RMIT University, Melbourne, Australia. He is also executive architect and researcher at the Temple Sagrada Família in Barcelona, Catalonia, Spain.

Tanya Ha is an Associate of the Melbourne Sustainable Society Institute and also Science in Public, a science communication agency working with AURIN. She is a past board member of Sustainability Victoria and an award-winning science and environmental broadcaster and journalist. She was previously a reporter for the respected ABC show Catalyst.

During Mike’s visit to Australia, he also spent time at the CSIRO sharing his expertise with the Cities Research Program team.

Read his discussion with program leader Greg Foliente on the question of What will our cities look like in the future?