This research was conducted by Lisel O’Dwyer, Senior Researcher in Social and Policy Studies at Flinders University and University of Adelaide using the AURIN Workbench for data and analytics.

Access to toilets and their availability when navigating a city or on route between locations is  important for all persons, and particularly so for specific demographic groups such as the aged, people with disabilities, people with certain health and medical conditions and parents with small children.

In general most members of these groups could be seen as persons moving through urban space for purposes other than employment, where workplaces provide toilet facilities for staff, as required by workplace OHS.  No such regulations exist to meet the toileting needs of persons traversing the city or engaging in personal or private activities in public spaces such as parks, thoroughfares and shops. Yet people use urban space for pursuits other than employment, such as entertainment, leisure activities, volunteering, shopping, socialising or sport and recreation, which are generally done locally or in the CBD.

Provision of public toilets for a city’s population when they are not at home is left to private businesses and local governments, who have no legislative responsibility to provide them.

Given these patterns of supply and demand, are there enough public toilets? How many public toilets are available and where? The National Toilet Map provides people with the locations of existing public toilets but how well does the geographical distribution of these toilets match the needs of local populations? Using the AURIN data portal which provides both spatial data (geographic boundary data, public toilet location data) and non-spatial data, (ABS demographic variables) we examine the match between public toilet provision and local populations in South Australia at the SA2 level.  A spatial join was performed to count the number of PTs in each SA2.  These data could then be used to calculate the ratio of persons per toilet in each SA2.

The ratio for SA as a whole was used as a benchmark to plot a final map showing SA2s above and below the State average, which is 1176 persons per toilet location. For metropolitan Adelaide, the ratio is 2,222 persons per toilet.

The National Toilet Map does not record how many cubicles are provided within each toilet location – public toilets usually provide more than one cubicle. If we assume that one half of the public toilets in metropolitan Adelaide have at least three cubicles (one quarter with two for females and one for males, accounting for the provision of urinals for males and one quarter with four cubicles), the ratio becomes 520 toilets per person. This is comparable with the British Toilet Association’s recommended ratio of one toilet (cubicle) per 500 persons. However, the availability of a toilet at all, irrespective of how many cubicles a toilet block may have, is generally the main concern for most people and there are no formal guidelines or standards on the ratio of toilets (whether blocks or cubicles) per se to the general public outside of workplaces and schools, or public events.

On a geographic basis, 15 per cent of the 162 SA2s in South Australia have more persons per toilet location than the ratio for the State as a whole and 18 per cent of the metropolitan area is under serviced in relation to the average. This equates to 16.7% of the Adelaide population, or 203,437 persons. As Figure 1 shows, underserviced SA2s are clustered in both the middle ring and outer suburbs and not necessarily associated with socioeconomic status. 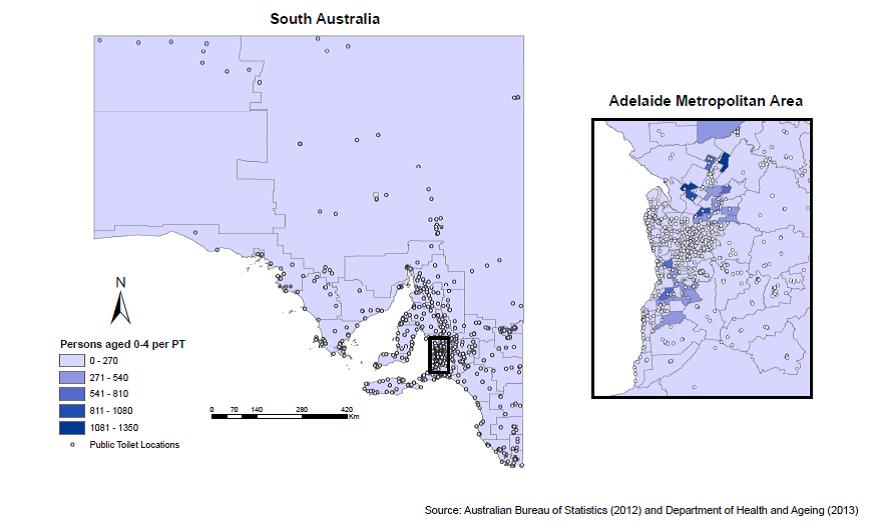 When the spatial distribution of specific demographic groups is related to the distribution of public toilets, a stronger socioeconomic divide is evident. For example, the correlation between socioeconomic status (as measured by SEIFA decile) and ratio of number of persons to each toilet is significant and negative for the very young and the very old using the log of the ratios (Table 1).  This pattern suggests there is a need for more public toilets to be available for the very young and very old in lower socioeconomic status areas, and also that there is an under supply in more areas than just low SES areas for the general population.

Table 1. Relationships between SEIFA Decile and Ratio of Persons per Toilet by Age Group 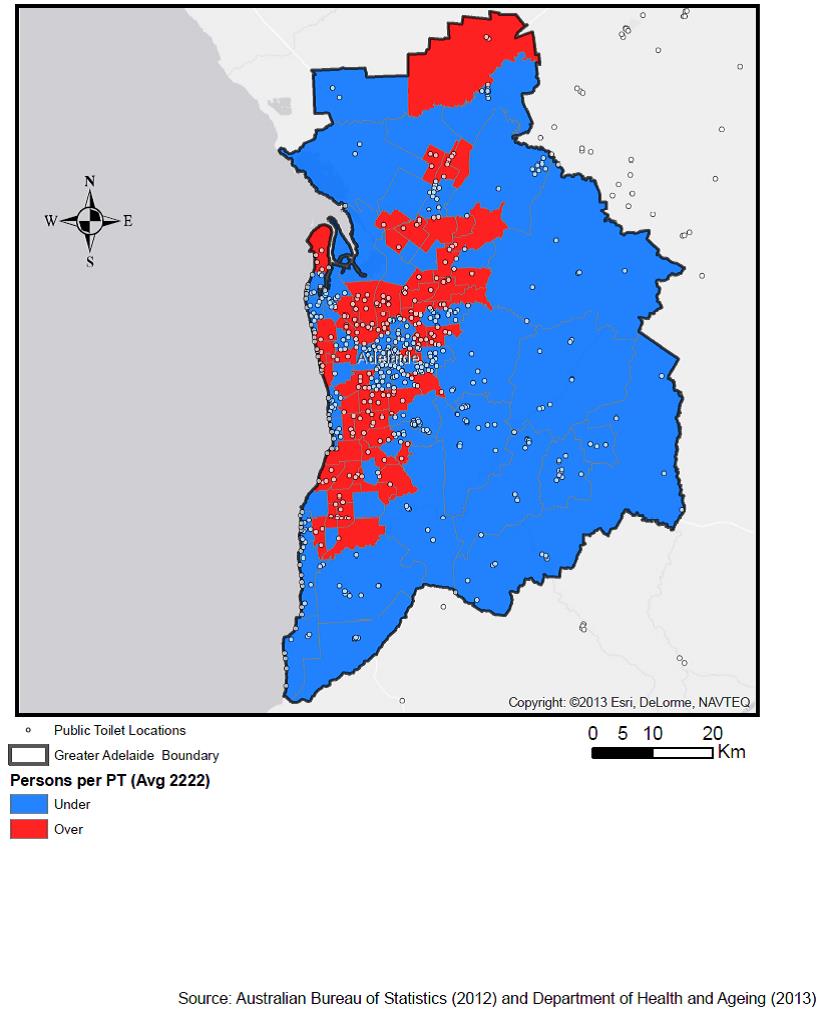 This research was conducted by Lisel O’Dwyer, Senior Researcher in Social and Policy Studies at Flinders University and University of Adelaide using the AURIN Workbench for data and analytics.

It was commissioned as part of the ABS Federated Data Hub Access and Evaluation Project in 2014.  This project provided a demonstration of a novel approach to accessing ABS Census data through an online interface that enables the interrogation, manipulation, spatio-statistical analyses, visualisation and modelling of the data.This collaboration between the Australian Bureau of Statistics (ABS), AURIN, the University of Queensland, University of Canberra, the University of Adelaide and the University of Newcastle, demonstrates how this innovation can improve access to the 2011 Census data and other ABS products, through programmatic connection via Statistical Data and Metadata Exchange (SDMX) services. Essentially the project implements and evaluates a machine-to-machine data hub model for data deliverable to clients external to the ABS and demonstrates the benefits and challenges associated with the ABS’s development of production level statistical data hubs.

The project incorporated four demonstrators that provide examples of ‘stories’ that can be told by enabling improved access to ABS data, focusing on the 2011 Census data and integrating it with other spatial datasets. This demonstrated the advantages of providing online web services to access this data in a programmatic way and for measuring the re-use of data.

This project also demonstrated the existing and future benefits of investment in ABS infrastructure – specifically building infrastructure that is based on open standards such as Statistical Data and Metadata Exchange (SDMX). It provided the initial experimental base from which a case can be developed to influence decision-makers about funding research and statistical infrastructure, involving initiatives such as AURIN, and through systematic development of capabilities by the ABS for online access and interrogation of data by the user.

The end users of the project are the social sciences research community, who now have faster, streamlined and more efficient access to key ABS and other datasets via the AURIN Portal. Researchers are now able to access statistical analysis and visualisation services through the AURIN Portal in a time efficient manner. The outcome enables researchers to address key urban and regional policy and planning research questions, in a timely fashion, based on empirical evidence. 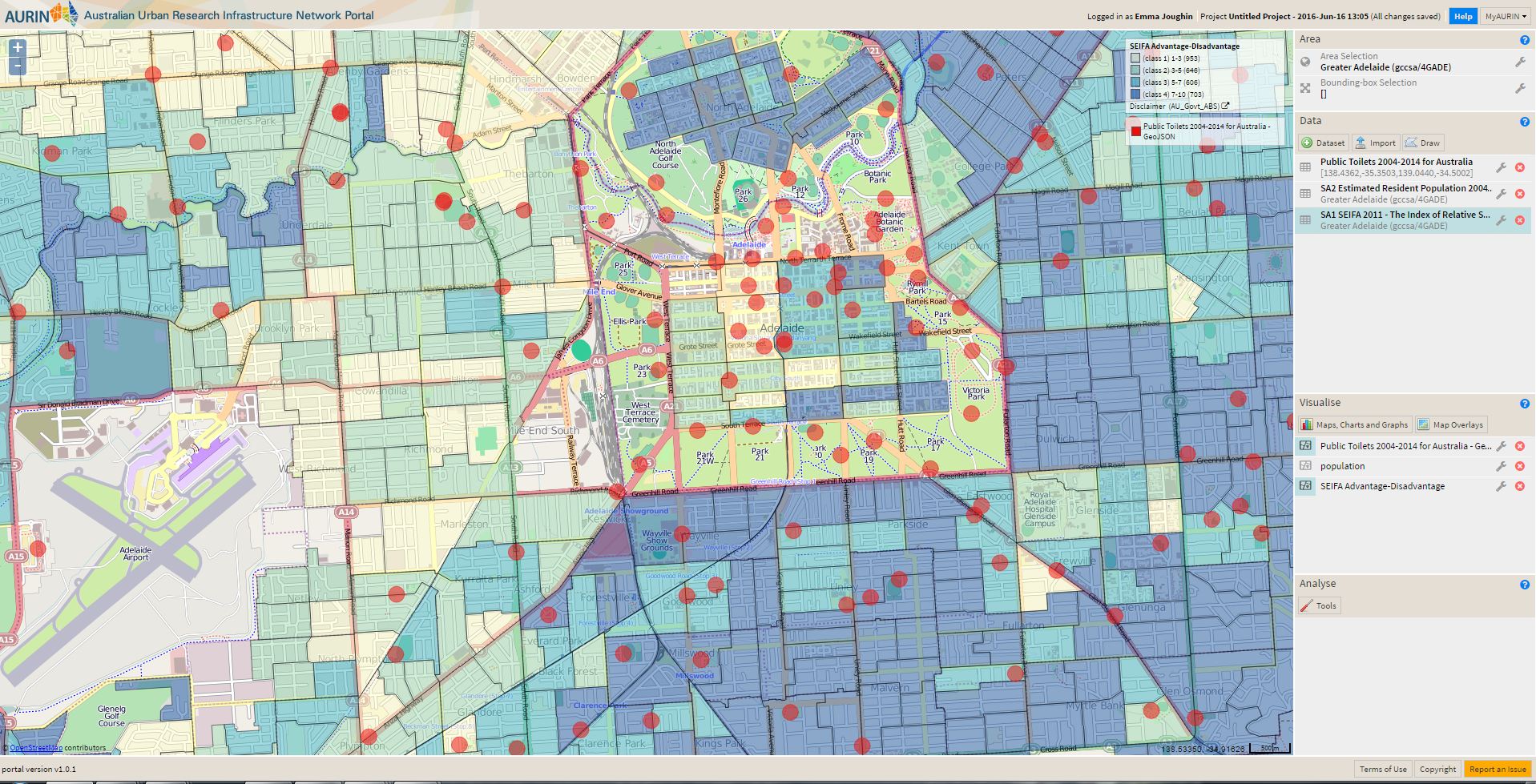 Research outputs displayed in the AURIN Portal.  Get access to the AURIN Workbench here: